Andreas Gehrke. In his photographs the subject matter is often abandoned, clear cut architecture that does not stand out unless you spend time looking at it. Stefan Roloff's installation consisting of interior componments of a typical GDR home a la the 1970's. Dawn Clements' large panoramic interiors, made by joining several paper panels together, form a synthesis of rooms from melodrama movies. 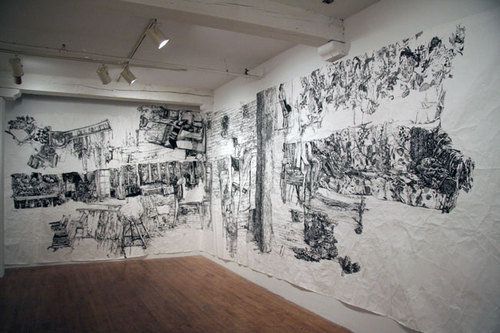 "You can resume your flight whenever you like, " they said to me, " but you will arrive at another Trude, absolutely the same, detail by detail. The world is covered by the sole Trude, which does not begin, nor end. Only the name of the airport changes." (Italo Calvino "Invisible Cities")

Andreas Gehrke, a self-taught photographer was born and raised in (East) Berlin during the cold war. Having worked both commercially and on his own projects for the past decade, Quiescent, his first solo show. It consists of a series of photographs made during the this ten years period (1997 2007) and is, according to the artist, "A feeling of the urban landscape, that I feel attracted - and invited - to investigat"

The photographs are set in places such as the Bronx (NY), Erkner, Edinburgh, Paris, Beirut and Beijing, to mention a few. All places look as if they could have been recorded in the artist's home town, Berlin. The subject matter is often abandoned, clear cut architecture that does not stand out unless you spend time looking at it, exploring it and giving it time. These places are not noticeable at first sight. They bring to mind the German word'ortlos'-without-a-place, not to be mistaken with the English non-place. Anonymous quiet sites that are inactive. It looks as if their state of presence is other than that which they were build for.

The exhibition consists of one large analogue c-print (126x170 cm ), three large (130x175 cm) and forty three smaller (40 x 53 cm) piezopigment prints. The latter are almost like a collage of hand-held, mostly medium format, camera images Gehrke shot around the world. Some in colour, some b/w, all of them with a combination of nature and urban structures that seems futile.

A limited edition catalogue will be available for the exhibition.

Andreas Gehrke have previously shown in group shows at PS1, NY as well as galleries in Berlin and with PIEROGI Leipzig. He lives and works in Berlin.

Videospace: Stefan Roloff. One + One

Stefan Roloff's One + One is an interactive installation consisting of interior componments (chairs, lamps, tables etc.) of a typical GDR (German Democratic Republic) home á la the 1970's. On the walls projected are films made in 1982 by Roloff himself of military men at the border (the wall), doing their job. These are from the film series "Life in the Death Zone", where the interest in the fact that someone - anyone - would be able to do their job in the no-mans-land that was the zone between the two contries is delved upon.

"I wanted to increase the city's observation by creating a mirror image. " (Roloff, 2006).

-Also installed is one of his light box-mounted photographs from the series Vopos in the East and Fopost in the west.

Documenting a performance and installation he did in 1981. in which Roloff constructed a small scale replica of a watchtower at a West Berlin check point (Bernauer Strasse).

In this body of works one sees Roloff's interest in the possibility and option of border-crossing. The installation makes it possible to go through imaginary passageways as well as the influence the passing of time has on our memory and view on how to deal with borders and their aesthetics.

Stefan Roloff have exhibited in institutions such as The Bronx Museum, Walker Art Center and the Brooklyn Museum. He had solo shows in Kunsthalle Osnabrück, Tread Waxing Space and the Centre Pompidou, among other places. He received numerous grants and awards. Roloff Lives and works in New York.

Clements' first solo show in Europe will be a continuation of her Brooklyn s PIEROGI Brooklyn show in 2007. The large, detail orientated interiors Clements creates will fill our second gallery. Her large panoramic interiors, made by joining several paper panels together, form a synthesis of real rooms and rooms from melodrama movies and TV soap opera series.

"I'm interested in lots of different kinds of films and film is certainly a giant influence on me. I seem to be very attracted to melodrama - film [...]" , Clements, 2007. .

One of the core pieces in her show is Color Oval, a ballpoint pen, ink, and gouache on paper, completed in 2007 (274, 3 x 244 cm or 108 x 96 inches). The piece is a detail orientated drawing of mostly female figures - with text scattered throughout the paper, going under, on top, through and around the figures.. There is not one perspective, but maybe a few hundred. The drawing, that looks like a combination of fashion schetces and an obsessive teenagers diary , is informed by a five year long interest in soap operas, forms an incoherent narrative, fractured and unrealisable.

Dawn Clements got her MFA at the State University of New York, at Albany. She have been shown at institutions like The Drawing Center, the Venice Bienniale, The Pumphouse Gallery, The Brooklyn Museum of Art, SAFN Museum,. Later this year her works will be on part of the group exhibition Edward Hopper and Contemporary art at the Kunsthalle Wien. Her works are aquired by The Whitney Museum of American Art, The Museum of Modern Art as well as a number of private and public collections. She lives and works in Brooklyn, New York.