Max Bill: no beginning no end 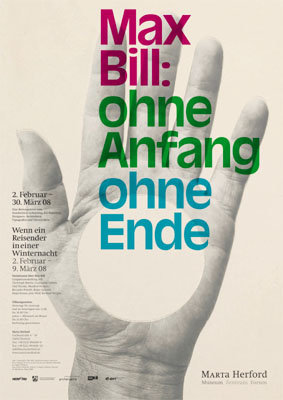 Retrospective marking the centenary of the birth of artist, designer, architect, typeface design and theoretician

To honor the 100th anniversary of the year of the birth of the Swiss multi-talent Max Bill (b. 1908, d. 1994), MARTa Herford is staging a major exhibition featuring his entire oeuvre of painting, sculpture, architecture, design and graphic design. The wide range of his output earned Max Bill the label “the last Leonardo”. Alongside his main occupation as an artist and designer, he also worked as an exhibition organizer, author, publicist, theorist, and teacher.

Having graduated from Bauhaus Dessau he settled in Zurich. His works from this period put him among the most well-known representatives of the “Zurich Concrete” group, which very much followed in the tradition of Constructivism and the Dutch group “De Stij”. Max Bill’s work is to be seen as an expression of a clear spiritual order, and as such as a model for a better social order. It displays an idealizing response to the horrors of the Second World War, in the same manner as previously the avant-garde of Modernity in response to the First World War. Offering more than just pure aesthetics, Max Bill aimed to formulate the ideal of a political and social order. Wholly in line with this commitment, in 1951 Max Bill was involved in the founding of the Hochschule für Gestaltung in Ulm, of which he was the very first Rector.

The exhibition extends its focus to include the artist’s cultural surroundings. In addition to being part of the French group of artists “Abstraction Création” he was also a member of “Allianz”, a Swiss group of artists, and kept in contact with important 20th century artists. These links are demonstrated by the presentation of various works by Josef Albers, Paul Klee, Wassily Kandinsky, and Kurt Schwitters to Friedrich Vordemberge-Gildewart, thereby revealing a discourse with the spiritual environment of his time.

The exhibition in MARTa Herford Museum is documented in a catalog of about 200 pages. It will be available at the museum store at 34 Euros.


Variations on Max Bill
In connection with the retrospective on Max Bill, selected works by German and foreign artists of the young generation will be shown which are visually related to Max Bill’s oeuvre. The artists to be featured include Guillaume Leblon, Olaf Nicolai, Riccardo Previdi, Bojan Sarcevic, Jens Wolf, Katja Strunz.