Metalwork from the Margo Grant Walsh Collection. This exhibition presents approximately 50 works designed by some of the leading architects of the late nineteenth to mid-twentieth centuries. The vessels, mantle clocks, flatware, tea and coffee services and other forms exhibited demonstrate the various international stylistic influences during the period. 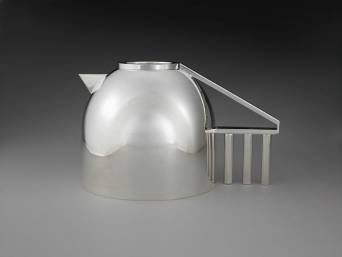 This exhibition presents approximately 50 works designed by some of the leading architects of the late nineteenth to mid-twentieth centuries. The vessels, mantle clocks, flatware, tea and coffee services and other forms exhibited demonstrate the various international stylistic influences during the period.

Margo Grant Walsh is an internationally prominent interior architect. She began her career with Skidmore, Owings & Merrill in San Francisco in 1960. Grant Walsh joined Gensler and Associates as interior design director in Houston in l973, then moved to New York where she opened the firm´s office to serve the design and planning requirements of Mobil Oil´s new headquarters in Fairfax, VA. While serving as the co-managing principal of the New York office and Gensler board member, Margo opened Gensler offices in Washington, D.C., Boston, and London. The London assignment was the direct result of work that Margo had done in New York for Goldman Sachs which was planning its new International Headquarters on Fleet Street. Ironically, the Goldman Sachs partner who recommended her to his London partners had introduced Margo to the "world of silver" when in 1981 her team designed his private office in new York and fabricated a pedestal for a piece of his important personal collection of 16th- and 17th-century American silver. She was intrigued and the rest is history.

During the remaining twenty-three years of her professional career, which focused on mega headquarters projects for global law firms, investment banks, and corporations, Grant Walsh took advantage of every rare day off to nurture her growing love for silver and fine metalwork. On business trips to London, which averaged eight times a year for ten years strong, she sought out antiques dealers, aiming to enhance her knowledge of 20th-century works. In the process, she began to build what is now a global collection of more than 800 exquisitely designed, functional, and impeccably well-crafted pieces. The collection comprises works by artists from seventeen countries.

Grant Walsh first became interested in copper, white metal, mixed metals, and jewelry during the late 1980s. Many of the pieces that she acquired were unmarked, and she was intent on tracing their makers and origins. By the early 1990s, she had shifted her gaze from an exclusive focus on English and American arts and crafts works to a more international perspective. She began to acquire Mexican, Scandinavian, and Italian pieces of the mid-twentieth century and later.

Margo Grant Walsh has an enduring passion for what she considers to be the "marvelous medium of metals." She also believes that great design is a universal language. The Museum of Fine Arts, Houston, is pleased to collaborate with Grant Walsh on the first publication to document her superb collection. The MFAH will publish Collecting by Design: Silver and Metalwork of the Twentieth Century from the Margo Grant Walsh Collection, in February 2008. This richly illustrated book will serve as an introduction to her collection as well as a companion to this exhibition.