His films have been shown worldwide and have won numerous awards and are included in the permanent collection of the Academy of Motion Picture Arts and Sciences in Los Angeles. For this one-person exhibition, Tensta Konsthall is proud to present for the first time in Scandinavia his two works "Women Who Wear Wigs" and "Semiha B. Unplugged". 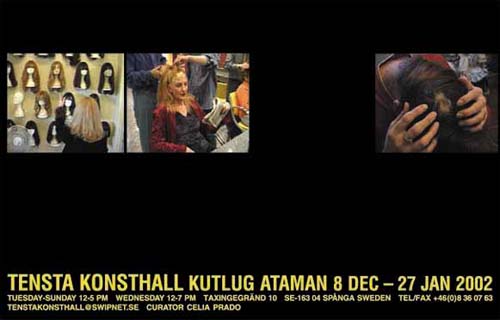 
TENSTA KONSTHALL is pleased introduce the work of the artist and filmmaker Kutlug Ataman.

Born in Istanbul in 1961, Kutlug Ataman studied in the USA and currently lives and works in London, England.

His films have been shown worldwide and have won numerous awards including Best Director, Best Screenplay, and Best Film, and are included in the permanent collection of the Academy of Motion Picture Arts and Sciences in Los Angeles.
Atamans first film, 'The Serpent's Tale', is considered by film historians to have initiated what is today known as Young Turkish Cinema, representing a clean break from the commercial exploitation movies of the past.
'Lola + Bilidikid' was chosen to open the Panorama section of the Berlin Film Festival in February 1999 and has since received commercial distribution worldwide.
The video installation 'Women Who Wear Wigs' was selected for the Venice Biennale 1999 and 'Semiha B. Unplugged' for the Istanbul Biennale 1997.
Ataman's films have also been extensively covered in international publications such as Flash Art and Frieze.

Kultug Ataman has taken part in film festivals in Stockholm and Gothenburg, for this one-person exhibition, TENSTA KONSTHALL, is proud to present for the first time in Scandinavia his two works "Women Who Wear Wigs" and "Semiha B. Unplugged".

Both works are intimate portraits of women telling us their life stories.
At once dramatic and incredible, the films are based in part on fact as well as containing elements of fantasy.
Both 'Semiha B. Unplugged' and 'Women Who Wear Wigs' reflect the kind of personality which attracts Ataman's interest: the individual who is willing to endure marginalisation in order to escape the control of repressive social structures.

'Semiha B. Unplugged' (1997) features the Turkish opera star Semiha Berksoy, now in her eighties, in a home-video style documentary.
Over seven hours in length, the video shows the singer performing a one-person show, complete with costume changes, in front of the camera.
Though a continuous monologue, Berksoy describes how she abandoned the social rules of her day in her determination to attain her own freedom and identity.

'Women Who Wear Wigs' (1999) is a video installation comprising four projections running simultaneously.
The piece presents four women with one thing in common: all of them wear wigs.
The stories of these women frame various facets of everyday life - career, family, sexuality and politics - in present-day Turkey.
Although based upon personal testimonies and deliberately avoiding the use of special effects, 'Women Who Wear Wigs' is not a documentary: you can never be certain whether the stories are completely authentic or not.
This narrative style skilfully forces the spectators to tread the fine line between truth and personal mythology, and to use their own imagination in order to clarify the facts.