National Museum and Gallery of Wales

Artes Mundi 3 presents recent work by 9 artists who question who we are and the societies we live in. From enormous textiles and paintings to compeling photography and video installations, this stimulating and thought provoking exhibition explores different perspectives on life and art. 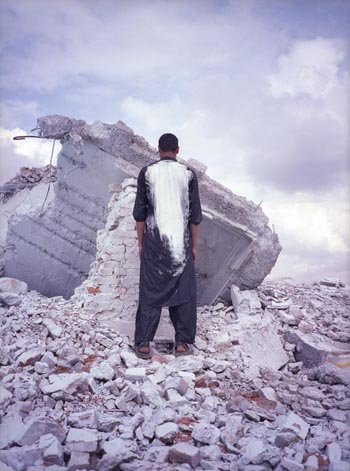 Artes Mundi 3 exhibition opens next month on15 March 2008 at National Museum Cardiff. It features major works from the nine artists shortlisted for the Artes Mundi 3 Prize - Lida Abdul, Vasco Araújo, Mircea Cantor, Dalziel + Scullion, N.S. Harsha, Abdoulaye Konaté, Susan Norrie and Rosângela Rennó. In addition, the exhibition will feature new works not seen before by Araújo, Harsha and Konaté. The winner of the Artes Mundi 3 Prize (worth 40,000 Pounds) will be decided by an international jury and announced on 24 April 2008.

Lida Abdul presents a selection of her filmic works including The Brick Sellers 2006 and Clapping with Stones 2006, where men are seated within the space once occupied by a Buddha destroyed by the Taliban. Abdul’s work speaks of violence and devastation but also survival and rebuilding.

Vasco Araújo presents a selection of films and installations including Augusta 2008 that will premiere at Artes Mundi 3 and Hereditas 2006, a work that muses upon childhood and fragility. Using allusion, he explores social behaviours, cultural stereotypes and sexual identity.

Mircea Cantor presents a series of works including the haunting Deeparture 2005 where a wolf and a deer circle each other, subverting our understanding of a predatory scenario. Cantor is interested not in creating images for their own sake but more for what they can say or suggest.

Dalziel + Scullion present two major installations - Source 2007, and More than us 2007 that explores the habitat of a rare day-flying moth. The artists use a range of media to explore the complex relationship between humankind and the natural world.

N.S. Harsha presents a series of large-scale paintings including Come give us a speech 2007/8, a new six-panel work to be seen for the first time at Artes Mundi 3. Harsha will also create a new floor painting in the gallery. Harsha has turned the Indian tradition of miniature painting into a unique commentary on contemporary life.

Abdoulaye Konaté presents a selection of textiles including a new large scale work Le dos à l’Âme 2008 measuring 4 x 2.4m. His work is embedded in the West African tradition of using textiles to communicate and commemorate, and initiate discussions of wider issues.

Susan Norrie presents Havoc 2007. Filmed in East Java, Havoc depicts a town made uninhabitable by the ceaseless eruption of hot mud. The work reflects the resilience of people confronting disaster and the town’s thermodynamics become a metaphor for our turbulent times.

Rosângela Rennó presents a series of photographic works including Farewell Ceremony 1997-2003 - thirty-nine photographs of Cuban newly-weds from the 1980’s. The captured moment loses its intimacy when seen repeated. Rennó uses found photographs and texts to re-present and re-invent the past.