From One O to the Other

The show presents three bodies of work by R. H. Quaytman, including recent paintings, Chapter 10: Ark, and a new book of writings, Allegorial Decoys. The exhibition was organized by Quaytman with Rhea Anastas, an art historian, and Amy Sillman, an artist, both of whom will also present new projects. 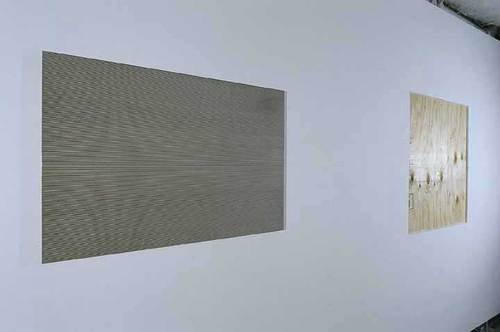 Put the eye back in the O through a small gap and look from there at the other eye—across—dead, now, here.

Put the eye back in the O and continue—rewrite. What name? Yours, mine, his, hers, perhaps even that of the buried god.

"From One O to the Other” presents three bodies of work by R. H. Quaytman, including recent paintings, Chapter 10: Ark, and a new book of writings, Allegorial Decoys. The exhibition was organized by Quaytman with Rhea Anastas, an art historian, and Amy Sillman, an artist, both of whom will also present new projects.

Marin’s artful reading of the famous inscription on Nicolas Poussin’s painted tombstone resonates with the questions and preoccupations of Quaytman’s current group of silkscreen on wood works. Chapter 10: Ark was made during the three year period from 2005-2008 that Quaytman spent as director of Orchard, and the works draw liberally from the artists with whom the gallery has realized works and exhibitions since opening, frequently in evidence in installation views appearing in the paintings. All of the works, some of them hand-painted and abstract, are records of Quaytman’s looking, figured here by such means as Op patterning, silkscreen amplifications from Polaroid source imagery, and by the residues, materials and marks of printing or hand-painting processes.

These works are in dialogue with the history and ideas of painting while boldly engaging a near opposite: the practices and discourses Benjamin Buchloh has named “perceptual withdrawal,” which for over three decades have placed painting in an obsolescent, if not archaic position. Quaytman’s works ask for excavation and deciphering, modes of attention complemented by the forms of display that define the exhibition. Many of the paintings can be found in an open storage rack near the rear of the gallery. Visitors are invited to pull them out, handle, and view them. Other works are sited in strong mimetic relationship to the architecture of the gallery and street. The paintings are peripherally situated to the huge spreadsheet of Orchard’s entire three year finances hanging in the front room.

Amy Sillman’s new project, Representation, embarks on a collective portrait of Orchard’s members and larger community. Beginning in February, the artist sat with each of her subjects for at least one hour, producing several ink and gouache drawings that are rich in expression even while restricted to monochrome head and face views. Taken together, these perceptual and empirical records become social, even as their “whole” of artists, supporters, critics, collectors, and visitors remains inevitably elusive. This portrait of Orchard is by definition narrower than a Huebler or McCollum-inspired portrait of “everyone,” although its “many” is powerfully suggestive of identities beyond those so often fixed upon us.

Sillman will continue her portrait series at Orchard four Saturdays during the run of the exhibition: March 29, April 5, April 12 and April 19.

Two additional archives round out the exhibition. In one, arranged in vitrines, Anastas presents a partial record of the print and web coverage received by Orchard over the past three years. The documentation describes the curious process by which a gallery predicated on self-reflection has itself been looked at and represented by others. Joining this is a second, up-to-date version of Quaytman’s poster Orchard Spreadsheet, a data listing of the gallery’s program and financial existence—from exhibitions and events to artwork prices and percentages paid on sales.

Finally, “From One O to the Other” gently traverses notions of authorship and acknowledges its debt to its friends by inviting a selection of “others”—as artist Louise Lawler has often referred to them—to sit in, represent, and otherwise mind the shop on select Sundays.