Susan MacWilliam, through her video-based installations, breathes life into the obscure history of research into paranormal perception. Irvin Morazan's headdresses and horse sculptures commemorate the displaced and exterminated indigenous tribes of the Americas. 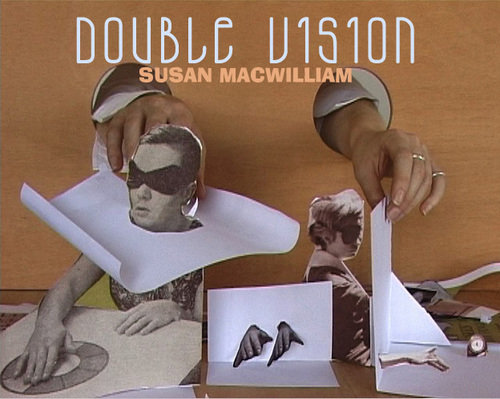 On the face of it, Belfast artist Susan MacWilliam breathes life into the obscure history of research into paranormal perception. Straddling the roles of scientific investigator, documentarian and artist, she delivers hauntingly beautiful video-based installations of real case studies. On another level, MacWilliam unravels some of our most basic assumptions about art, authenticity and perception.

In Dermo Optics , MacWilliam presents footage recorded in 2005 when she traveled to Paris to meet Madame Duplessis, a senior researcher in dermo optical perception and director Centre d'Information de la Couleur. Madame Duplessis and her colleagues are observed as they demonstrate the experimental apparatus in her cellar laboratory.
dermo optics - Dermo optical perception (also referred to as eyeless sight or fingertip vision) is the ability to 'see' without using the eyes.

Testing and demonstrating the dermo optic phenomenon requires that experimental subjects cannot "see" what they are doing. The conventional scientific apparatus that has evolved is an architecture that dramatically severs the intimate connection between the eyes and the hands—not so much blinding the eyes, as with a blindfold, as putting the two into different spaces. For many of us, especially artists, this is a peculiar, even unthinkable dissection.

MacWilliam, having explored the terrain for over ten years, is an authority in her own right. She tastefully refrains from sensationalizing the procedure into a spectacular card-trick ta da! Instead, she rushes through the gestalt of the apparatus at great flickering speed to confound the viewer's ability to emotionally invest in outcome, let alone even properly "observe" it, as might a scientist; then, she slows to linger on fragmentary moments of demonstration, evocatively choreographed to a jazz sound track. It is mysterious, even sexy. In a further twist, the demonstrating researcher is at times blindfolded. But then, of course, the piece is about showing how to see by not seeing.

To a contemporary mainstream art audience, this is as close to magic as it gets. And as such, it is as inherently suspect as it is seductive. Most of us have made up our minds from the beginning that this ESP stuff is a lot of hooey, and that any evidence to the contrary is a trick, or worse, outright fraud. To be sure, it is not a fair trial...

But what's on trial here is not so much about how "gifted" research subjects read color, as how we read an image. MacWilliam drives home the point with her marvelous video "Explaining Magic to Mercer." She finds in her five-year-old nephew a credulous listener. He is shown seated by himself at the kitchen table, half focusing on his drawing and half mumbling his end of a conversation about magic. His interlocutor, however, is unseen and unheard; instead the words appear onscreen as subtitles—authoritative, thoughtful and patient, but in no way romanticizing the subject. For all we know we are reading what isn't there—as though these are messages from Mercer's invisible (or imaginary?) friend... Yes, in him, bless his heart, magic is plausibly alive.

Susan MacWilliam has exhibited actively in important venues around the world. This is her first New York solo show.

BIO
For over ten years, Susan MacWilliam has been developing a body of works that explore ideas about the paranormal, the supernatural and perceptual phenomena. Incorporating research into the fields of parapsychology, psychology, physiology, photography and optical viewing devices, the practice explores ideas about the visible and the invisible; about vision, perception, reality and illusion. Using video, installation and photography the practice involves the investigation of particular individual case histories and myths. MacWilliam has made works about materialization mediums, table tilters, optograms, trance, clairvoyance and x-ray vision. "Dermo Optics" (2006) uses footage shot in the Dermo Optical Perception Laboratory of Madame Duplessis, Paris while "Experiment M" (1999) is based on the case of the Belfast-based table levitator Kathleen Goligher and her researcher Dr. William Jackson Crawford. MacWilliam produces unique works of art that provide a visual entry point into the history of parapsychology.

In 2006, MacWilliam worked with both the American Society for Psychical Research and the Parapsychology Foundation, New York. In 2007, MacWilliam undertook a residency at the Parapsychology Foundation Library, New York, where she conducted research into the Irish medium and founder of the Parapsychology Foundation, Eileen Garrett. The video work '13 Roland Gardens', was developed from the residency and premiered in 'Seeing is Believing', The Photographers' Gallery, London, 2007. The work was exhibited alongside archival photographs of mediumistic practice and psychical research from the Harry Price Collection of Magical Literature. A new body of work about Eileen Garrett will form a solo exhibition at Gimpel Fils, Gallery, London, May/June 2008. In summer 2008 MacWilliam will travel to Winnipeg for a residency at Platform Centre for Digital and Photographic Arts and to research the Thomas Glendenning Hamilton Spirit Photograph Archive, at the University of Manitoba.

Aztec priests wore the skins of their sacrificial victims in annual fertility rituals honoring Xipe Totec ("Our Lord, the Flayed One"), their god of Spring. He was a powerful life-death-rebirth deity, who enabled the annual return of the crops.

On his opening night, Irvin Morazan, wearing a giant Mayan-inspired headdress that is blood red and fleshy in the image of a horse, enters the main door of the gallery, down the long processional corridor to a ritual chamber in the rear. There, seated on a throne is another headdressed "priest." Intensely solemn, otherworldly music sets the tone, as the two assume positions opposite each other—sporting erections—and, with the aid of microwave ovens, proceed to create more and more of this fleshy substance, which they then throw at each other in messy combat.

Needless to say, this is not a literal re-performance of Aztec ritual. The Aztecs didn't have horses—let alone microwaves. Nonetheless, it is inspired by the rich cultural history of the Pre-Columbians. Morazan, born in El Salvador, is indeed descended from Mayans. But he is educated in the US at the School of the Visual Arts (BA, 2003) and instead looks to what remains of his pre-Columbian visual and cultural heritage (much of it was systematically destroyed by the Spaniards) as rich source material for his own explorations in contemporary art.

Morazan's headdresses and horse sculptures commemorate the displaced and exterminated indigenous tribes of the Americas. He writes:
The Mayans were innovators who excelled in mathematics, politics, botany, astronomy, architecture and the arts. Shamans served as intermediaries between humans and the supernatural: they had visions that allowed them to move freely beyond the ordinary world, and beyond death, to deal directly with gods, ancestors, or anything within the spirit world. When depicted in painting and pottery, the shaman were often portrayed in the act of creativity. To the shaman, the process was a notable act that demonstrated the ritualistic qualities in art making. The horse was a crucial factor in the conquest and demise of indigenous cultures of the Americas. The Mayans and other Native Americans hesitated from fighting against the Europeans during the time of the conquest because they feared and respected the horse. It came to symbolize the end of their way of life.

After the performance, the headdresses and horse costume—along with the throne and the strewn aftermath of their war—remain parked in the gallery. As sculptures, they are gory and ominous as oversized carcasses, and as strangely beautiful as flesh itself.