News Animations / No Words For You, Springfield. If Jeremiah Day's practice oscillates between the creation of text and image, Simone Forti bisects his axis with her interest in text and movement. The resulting collaboration is documented and presented as part of the exhibition. 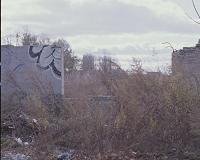 Jeremiah Day is interested in resistance movements, as well as the flux of knowledge, stories and identity through the migration of people and histories. Day has been researching the movement of the people of the Blasket Islands off the Dingle Peninsula (Ireland), to the town of Springfield near Boston (USA) culminating in a complete evacuation of the Islands in the 1950s.

What we know of the poetic tradition of the Blasket Islands comes to us largely through the efforts of the English linguist George Thompson. In the story-telling of the Blaskets, Thompson felt he'd found a link with the pre-Socratic tradition of Greek epic poetry, where spiritual, personal, political and practical subjects were integrated, and thus the boundary between art and life could be said not to exist at all.

Springfield has been largely in decline for fifty years now, a classic post-industrial American city. Can we imagine that any of the story-telling traditions of the Blaskets have lived on, there? And though the Blaskets are long deserted, what of the now developed Ireland around them? What does progress mean, from the lens of the Blasket tradition?

"Poetry proper is never merely a higher mode of everyday language. It is rather the reverse: everyday language is a forgotten and therefore used-up poem, from which there hardly resounds a call any longer." - Martin Heidegger

Day will show a new series of photo-works, meditating on the city of Springfield as the end point of the Blasket story-telling tradition. He has also invited legendary dancer Simone Forti to present for the first time in the visual arts context her practice of "News Animations" - a body of work Forti has developed since the early 1980s, improvising movement and speech from the content of the daily news. A member of the pioneering Judson Church Group, Forti's work has been shown at the Whitney Museum of Modern Art in New York and recently at the Serpentine Gallery in London; this exhibition will be the first presentation of her "News Animations" video.

Whilst in Dublin, Forti and Day will work together to create a new collaborative work. If Jeremiah Day's practice oscillates between the creation of text and image, Simone Forti bisects his axis with her interest in text and movement. The resulting collaboration will be premiered in Project's Gallery at 6pm on 25 March, and will be documented and presented as part of the exhibition.