I Hate The World And The World Hates Me. A multi-media exhibition comprised of installation, painting, video and photography by the Berlin and London-based collective. 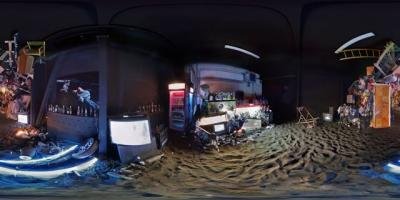 Before exhibiting at the Saatchi Gallery in London and the Hamburger Bahnof in Berlin, Cueto Project has the pleasure to present the Artists Anonymous. Artists Anonymous is pleased to present I Hate The World And The World Hates Me, a multi-media exhibition comprised of installation, painting, video and photography by the Berlin and London-based collective.

"Since their founding in 2001 (specifically September 11th, "the beginning of World War III" according to their manifesto), Artists Anonymous have dismissed the individual ego and make no distinction between art and life. Their work is acutely socio-critical, described by the Berlin-based critic Alix Rule as "Apocalyptic Beuysianism", a tribute to the core psychoses- preoccupations with death, destruction, disease, prejudice and altered states- that both separate and unite humanity.

In I Hate The World And The World Hates Me, Artists Anonymous continue to reference Beuys, while simultaneously contradicting him. They are the negative to his positive, the cynicism to his optimism. It is precisely this aspect of opposition that Artists Anonymous seek to achieve in their work, through their subject matter and their combinations of media that concurrently honor and dismantle the pillars of art historical precedent.

Since their inception, Artists Anonymous have painted in the negative palette, then photographing their work to create its positive inverse, what the group terms an "after-image". Although the artists employ classical techniques, such as under-painting, they incorporate aesthetic taboos, juxtaposing time-honored traditions of artistic elitism and their modern antitheses. The academia of figurative representation and the intellectualism of abstraction are shown in an unholy union with the decorative arts and graphic design, while religious idols are coupled with ironic symbols of pop culture, such as Kali, Hindu Goddess of Destruction, and Daisy Duck, iconic cartoon female.

The paintings exhibited here show subjects covered in tattoos, visual identifiers of modern society's deviants. Body art has undergone a historical transgression from sacred to profane, once signifying tribal rites of passage, now characterized by the rejection of mainstream values and associated with gang members, prisoners, punks and the creative under classes. Tattoos themselves are exercises in the decorative arts, their designs simplistic, leaving little to the imagination. They are what they appear to be, but through their existence alone they invoke immediate (and often negative) judgments about those who wear them.

Misinformed first impressions are a central theme of I Hate The World And The World Hates Me, encapsulated not only by these tattooed figures, but also by a 3-dimensional installation painted to appear as a 2-dimensional work, which references the fabled Frauenkirche, a church in Munich designed to trick the Devil. Legend has it that the church's architect bet his soul that he could build a light-filled church with no windows. When the Devil arrived to claim his prize, believing it couldn't be done, he was furious that the architect had succeeded, flying into a rage at church's front door, which to this day bears his foot print. The architect had only created the appearance of a solid interior, with the windows hidden by rows of columns when viewed from the church's front door, but this myth asserts the moral, still relevant in our present-day, that first impressions are the way of the wicked and do no justice to the complexity of the things they represent."