In celebration of the centenary of Pasmore's birth, an exhibition of the artist's late paintings and etchings. Although produced during his last years these colourful and lyrical works display a rare beauty and optimism without loss of energy or commitment. 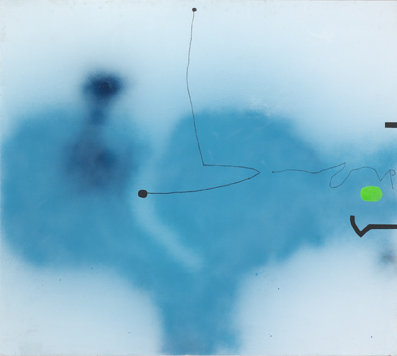 In celebration of the centenary of Victor Pasmore’s birth Marlborough is proud to present an exhibition of the artist’s late paintings and etchings. Although produced during Pasmore’s last years these colourful and lyrical works display a rare beauty and optimism without loss of energy or commitment.

Many of the 16 paintings on view remained in the studio in Malta at Pasmore’s death and have never been exhibited. They date from 1992 to 1997. Prints were an integral part of Pasmore's artistic output. He made prints consistently from the early Seventies throughout his career. Included in the exhibition is the definitive series, from 1992, Images on the Wall and The Birthday Suite which was among one of the last set of etchings he made.

Following his pre-war success and his association with the Euston Road School, Pasmore dramatically embraced abstraction in 1948 and was at the forefront of Modernism with his constructions in the 1950’s and 60’s. He then returned to pure painting, and with a move to Malta - to glorious Mediterranean colours. During these years he experimented and refined his unique poetic vision of which these beautiful last works are a celebration.

A fully illustrated catalogue will be published.