Works on Paper & Paintings. The exhibition consists of thirty works spanning from 1974 to 2004, twenty-five acrylics on paper and five on canvas of the american artist, often associates with Pop art. Wesley starts his work by making a tracing of an image; he then experiments reversing, repeating and combining the traced elements until he arrives at the finished composition. 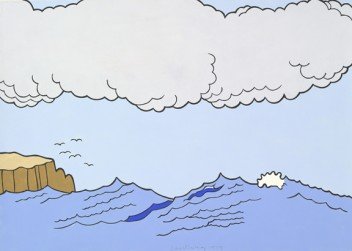 “Going to the beach as a child… seeing a street whose end was a hole of blue made of sea and sky, framed by buildings. My childish heart was filled with the notion of infinity” * – John Wesley


Waddington Galleries are pleased to announce an exhibition of works on paper and paintings by John Wesley – the first survey of his work to be held in the United Kingdom. The exhibition consists of thirty works spanning from 1974–2004, twenty-five acrylics on paper and five on canvas.

John Wesley was born in Los Angeles in 1928. In the mid-1950s he worked as an aeronautics draftsman in California, interpreting the engineers’ blueprints by making simplified illustrations. In 1960 he moved to New York and worked at the Post Office to subsidise his painting practice. Wesley’s earliest paintings were of stamps and badges, from where he introduced the compositional device of a painted border, usually white, which has remained integral to his image-making ever since. Wesley’s first solo exhibition was held at the Robert Elkon Gallery in 1963. Donald Judd reviewed the show, from the outset was a strong supporter and remained a close friend of Wesley’s - there is a permanent installation of Wesley’s work at Judd’s Chinati Foundation in Marfa, Texas.

Wesley’s work is often associated with the umbrella term of ‘Pop Art’ and has been included in international Pop exhibitions but as Marco Livingstone notes in the catalogue essay accompanying this show “With time however, it has become apparent that his work did not quite fit into this context [either], favouring as it did a timeless, dreamlike space over contemporary life and valuing human intimacy over participation in mass culture”.

Wesley starts his work by making a tracing of an image; he then experiments reversing, repeating and combining the traced elements until he arrives at the finished composition. From this he makes an acrylic work on paper and from this a painting. Wesley has consistently worked with his distinctive palette ; primarily, varying tones of ‘pastel’ blue and pink, along with variations on a ‘grass’ green, strongly supported by black and white, which also provide the key compositional frameworks of the black contour line that describes the forms and the frequent white painted-in border.

Wesley referred to American mythology and/or history in his 1976 series patriotic tableaux made to mark the United States Bicentennial, two works on paper of which are included in the exhibition - ¿Quien Es?, which depicts the wrapped body of western hero Billy the Kid surrounded by male figures one of whom is his killer Pat Garrett, and also Flood: Johnstown, Pennsylvania: 1889, which references the biggest flood in America’s history that occurred in Johnstown in 1889. A work such as Spindrift from 1979 uses cartoon-shorthand horizontal lines to suggest a hat and racket uprooted in a gust of wind. The hat is that of the cartoon character Dagwood Bumstead who Wesley has consistently returned to as a subject since first painting him in 1973, and relates to Wesley’s visual recollection of his father, who died suddenly of a stroke when Wesley was five.

Yelling, for example, of which both the painting and the work on paper are included in the exhibition, is painted flatly, though with subtle brushwork visible, as is typical to Wesley, and with the forms described by Wesley’s ‘elastic’ black outline. Whereas in other double portraits such as the work on paper Dr. Interrupted where each face has a slightly different flesh-pink skin tone, in Yelling their tone appears the same, suggesting a reading of the two faces as two facets of the same person. The concentrated face on the right has her eyes closed whilst her alter-ego is calling out, the chin protruding through the white border - it captures the same silent cry as Munch’s Scream. The 1989 painting String of Girls illustrates Wesley’s use of repetition with its frieze of seven nudes unfolding across the canvas surface, both static and dancing, like the endlessly multiplying brooms in the Walt Disney film Fantasia.

John Wesley lives and works in New York. His work is held in over twenty five public collections worldwide including Kunstmuseum, Basel, Whitney Museum of American Art, New York and Museum of Modern Art, New York. Retrospectives have been held at Stedelijk Museum, Amsterdam (1993) and PS1 Contemporary Art Center, Long Island City, New York (2000) and an exhibition of works on paper from 1960 onwards was held in Museum Haus Lange, Krefeld, touring to Kunsthalle Nürnberg, 2005-2006. In 2004 a permanent installation of Wesley’s work opened at the Chinati Foundation, Marfa, Texas.

A fully illustrated catalogue with an introduction by Marco Livingstone accompanies the exhibition.