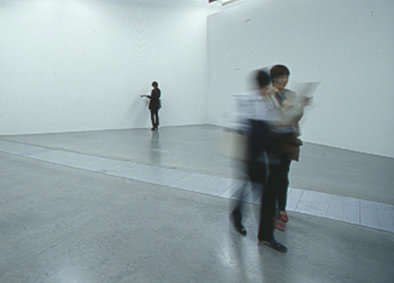 Galerie Barbara Weiss is showing works by Maria Eichhorn from the years 2001--2007, which the artist created for biennials and other exhibition projects. Maria Eichhorn's first exhibition at Galerie Barbara Weiss took place in 1991 and attracted international interest. The gallery was filled with a salty fog and transformed into a climatic chamber. Since then Eichhorn has taken part in important and pioneering exhibitions and biennials and her works are included in many collections. Her complex and multi-facetted work cannot be simply categorised.

"Joint Account No. 1711601, Bank of Fukuoka, Yahata Branch 411" was produced for the Yokohama Triennial 2001. Eichhorn used her budget to set up a joint bank account that was freely accessible and open to general use. Visitors to the Triennial were able to withdraw or pay in money and the transactions were registered in an account book on show at the exhibition.

"Prohibited Imports" (2003) refers explicitly to the Japanese customs authorities' practice of censoring imported books. In the years 2000--2002 several packages with books were sent from Berlin to Tokyo, including the monograph on Robert Mapplethorpe, "Mapplethorpe. Die große Werkmonographie", which was censored. Eichhorn's project has been exhibited at venues in Japan and Canada, and is now to be shown in Europe for the first time.

"von 12,37 bis 36,08 = 24,94 von 100 %" consists of a presentation display and a book that provide an overview of all the women who participated in the Graz festival "Steirischer Herbst" from its beginnings in 1968 to 2007. Eichhorn designed the display for a bookshop that only had this book on offer, and this shop was run by women from feminist backgrounds during the Graz exhibition. The book was published by Verlag der Buchhandlung Walther König. For this exhibition Maria Eichhorn has compiled an accompanying reader with extensive text and picture documentation.