The work of Yona Friedman is the starting point for this exhibition with the title itself being a reflexive reference to the architect's book of the same title, which looks at the precarious nature of modern society and suggests creative strategies which could counter the problems thrown up by hyper-consumption and capitalist modes of spatial and social organization. Curated by Komplot. 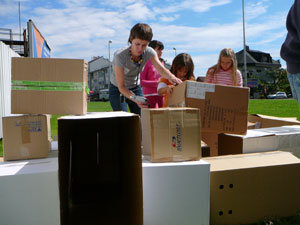 The work of Hungarian architect Yona Friedman (b. 1923, Budapest, lives in Paris) is the starting point for this exhibition with the title itself being a reflexive reference to Friedman's 1975 book 'Architecture Of Survival' (MIT Press, USA). The book looks at the precarious nature of modern society and suggests creative strategies for countering the problems thrown up by hyper-consumption and capitalist modes of spatial and social organisation. Friedman rose to prominence with his manifesto 'L'Architecture Mobile' ('Mobile Architecture', 1958) and plan for a utopian city 'La Ville Spatiale' ('The Spatial City', 1959); his ideas led him beyond architecture and to engagement with sociology, economics, mathematics, information science, planning, visual art and film-making. Today, his writings have become influential as architectural concepts which take as their starting point the perspective of those existing in a state of generalised poverty within capitalist economic model. He proposes structures for the unpredictable, providing the means and ways for people to determine, re-appropriate and re-invent their own living environment beyond the normative functional ability of new social forms to shape their own living spaces.

Relative to Friedman's method of re-appropriating architecture as a creative tool -through the creation of "do it yourself" manuals, instructions and recipes- the exhibition will articulate the way in which the actual creative process integrates the notions of survival and mobility. Fundamentally, how the artworks 'survive' their original context. The artist's work will deal with 'traces' and 'remains' of performances and actions, this being an area of investigation privileged in the project, the participative and performative aspects of the works being crucial within this context. One of the common material characteristics of the works exhibited is 'lightness' and economy of means. Whether they are constructed from recuperated material, fabric, objects or paper or are audio-visual, they are designed to be easily transportable – allowing improvisational flexibility of creation and presentation.

"All artists are alike. They dream of doing something that's more social, more collaborative, and more real than art." - Dan Graham.

With 'Architecture Of Survival', there is the creation of a certain 'critical distance' apropos artistic social utopian trains of though and a desire to revive the exhibition model and its relationship with the spectator.

Agency (founded Brussels, 1992) constitutes a list of quasi things: things that witness hesitation in terms of the bifurcation of nature into classifications of 'nature' and 'culture'.
In 1993, Publications International Ltd. published a book of yogurt-based recipes called “Dannon Healthy Habit Cookbook”. Soon after, a conflict arouse wherein the publishing house Meredith Corp. claimed Publications International Ltd. copied 26 of its recipes from its cookbook “Discover Dannon”. During the ensuing court case Publications International Limited v. Meredith Corporation, the judges stated that “the recipes contained in 'Discover Dannon' do not contain even a bare modicum of the creative expression—i.e., the originality-- that is the sine qua non of copyright”. Recipes are considered a combination of “identification of ingredients” (nature) and “directions for preparations”, and may only in certain forms of writing merit the protection of copyright (culture). 'Specimen 0848' will bear witness on April 27th 2008 to an assembly of concerned cooks, writers, publishers, lawyers, etc., at the culinary bookshop Kochlust, Alte Schönhauser Str. 36-37, Berlin.

The works of Jofroi Amaral (b. 1978, B, lives in Berlin) function as associative elements that can create new meaning. The tent/shelter he exhibits will be situated in front of a video by NG, to provide a shelter for the viewer’s head. Made out of recuperated canvas and plastic, the small tent and pillow are white and shiny, reflecting the ambient light. The cosmological dimension of the work is pregnant with implications.

Vaast Colson (b. 1977, B, lives in Antwerp) deals with the environment he is exposed to in the context of an exhibition. He creates no 'art work' in the traditional sense. The works exhibited often consists of the remains of a performance. In his seemingly simple actions, he touches on questions about social network we inhabit, and 'back to basics' approaches. For example, during one of his performances, Colson asked an Indian flower-seller to receive his provincial price for contemporary art, and make a speech. For the project in Berlin, he will also engage in a confrontation with a contemporary art situation, that we're yet unfamiliar with at this moment.

Fabien Defendini (b. 1978, F, lives in Brussels): Considering architecture as the perception of time as a object utilised and of space as a social practice, the artists idea is to project an image of a building upon another, juxtaposing two time/spaces. The artist will also re-contextualise the work by use of his own voice, trying to test his vocation to articulate a political discourse that may be forgotten as simply an 'exercise'.

Delphine Deguislage (b. 1980, B, lives in Antwerp) will create an installation in the main window of Sparwasser by using coloured tape as a base material to create forms which link public space to the exhibition space. Using very simple materials and processes, she asks the public to look at their everyday environment in a new way.

Simona Denicolai (b.1972, I, lives in Brussels) & Ivo Provoost (b. 1974, B, lives in Brussels): Many of the artists interventions (video, installations, architectural and public space) originate from a questioning of the 'identity sphere' -whether it is mental, socio-economical or physical acceptation- of the individual in society. And the first social cell, the primary source of confrontation and exchange with otherness is the couple, which in their case is their creative nucleus. Distinction between public and private spheres is therefore often consciously blurred. React to the additive and mobile strategy of the project, they develop a performative concept: the dissemination of an announcement, describing a mental image, repeated until this image attains more street credibility than its actualisation.

Yona Friedman (b. 1923, Budapest, lives in Paris) will distribute manuals for building structures, sculptures, and shelters. Komplot will assist in constructing these in public space.

Laure Gatelier (b. 1977, B, lives in Brussels) will work with the 'memory of Berlin' and reactivate some long-standing clichés such as impacts of bullets, which can still be viewed on walls around the city.

Agnès Geoffray (b. 1976, F, lives in Brussels) tackles what she calls “legendary cruelty”. She explores the dark side of our psyche, alongside an investigation of the borders between reality and fictional world. In doing so, she often recycles and reworks images or stories from “faits divers” she comes across in the media. She appropriates them as a metaphor of a common strategy of survival we all, to a certain extent, resort to. For Geoffray, fictions are just possible realities. Her installation for this project uses images considered too violent to be published.

Ella Klaschka (b. 1969, D, lives in Berlin and Paris): A poster is the first thing one puts onto the wall to feel 'at home' in a new environment. Posters define subjective relations between human beings and architecture. Randomly put up in cities, they trigger the passer-by. Posters are ideas, slogans, and images in motion. They stand for something else: Put up in a teenager’s bedroom they are...

Nathalie Mertens (b. 1969, B, lives in Brussels):'Queen of the Night' is the name of black tulips that the artist planted this winter under signs in the Stadtpark next to Mitte with the idea that they will duplicate the signs representing black tulip, indicating the presence of plants that cannot be walked on. The tulips will grow end of April also possibly on the grass of the Dutch Embassy, in front of Rem Koolhaas building. Letters of request to the Embassy and photos of the tulip planting will be integrated into the project.

NG (lives everywhere) : As an artist NG is looking for a new way of living / moving / working . The video 'Limits Of Paradise: Free Solo' is a dream of survival: the artist wandering in different landscapes (snowy mountains, post-industrial river side, wild nature…) gathering, telling the name, eating, herbs, bays, plants. The video will be accompanied by her drawing and text 'Statement' showing all the means of travelling and lodging that she uses on her frugal travel (hammock, tent,…). NG will also present the lecture 'Break Hotel' in which she recalls snatches of conversations she has had on how she lives, works and moves as an artist from one residency to the next project.

Yan Renand (b. 1979, F, lives in Brussels) will bring a suitcase full of objects created for the occasion out of 'Moldiness', the generic title of his current work. Renand works with objects he finds and creates a process of transformation by mixing painting, food, growing vegetation in plastic bags. The process of life and death in the work is a striking element, celebrating the fragility of things. Renand will also do a 'knitting' performance using plastic strings.

Kurt Ryslavy (b. 1961, Austria, lives in Brussels): 'Europäer' is a book in which the artist tells the story of the relationship between his art and his wine-business. How both activities influence each other, how he started the business to survive as an artist, how alcohol creates social links and how this double life can make him look strange in both milieus - all this presented in the form of an autobiographical text translated in 36 European languages, providing a European tableau or portrait of a modern painter. The artist will serve wine wearing his business-suit ... he will leave not only empty bottles and artistic drips.

StudioBasar (Founded in Bucharest, 2004): This duo of architects will distribute their posters 'Evicting the Ghost' which are concerned with creative engagement with the issue of housing eviction after the fall of Communism in Romania. This problem of survival in the pro(s)perty based society revealing larger issues about marginalisation is approached through the symbolic meaning of the team's name: STUDIOBASAR - which B (from Borcan) A (from Axinte) and SAR (from the acronym search-and-rescue).

Kevin van Braak (b. 1975, NL, lives in Rotterdam) & Rossella Biscotti (b. 1978, ITA, lives in Rotterdam) invite the architect Bart Schoonderbeek to participate in ‘The Good Life’, a project inspired by the homonymous book of architect Inaki Abalos which invites one to travel in the imagination, to stimulate the pleasure of thinking, to plan and living intensively, to encourage the invention of a house that doesn’t exist yet. The project explores the relationship between the architectural elements of a house and the construction of a movie set. The mobility of the set allows the rupture of the fixed structure of a house and starts a process of exploration in which new ways are formulated for people to use the environment. ‘The Good Life’ involves the design and the actual building of a house/structure that becomes the main character of a movie. It’s going to be a movie where the movement of the local community/actors inside the house will test and push the design of the architectural elements towards experimental shapes. Salento, which is in the region Puglia in the South of Italy, will be the location of the project.

An event that started as a tea-time-gathering in far-away Beijing evolved towards a total Sunday celebration and flew all the way over to Berlin. Music is the main (but not the only) ingredient of Bloody Sunday. Apart from a great music selection provided by DJ T-Ina Darling (Dubstep), DJ Mellow Yellow (Electro mashed potatoes) and a special performance by Miss Le Bomb, 'Bloody Sunday' includes also video screenings, magazines and other surprises!