The artis has produced a body of work which critiques the formal rhetoric of sculpture in an age of installation. In an investigation of the etymology of sculpture through materials, Francois has made works which oscillate between a delicate fragility and industrial resilience. 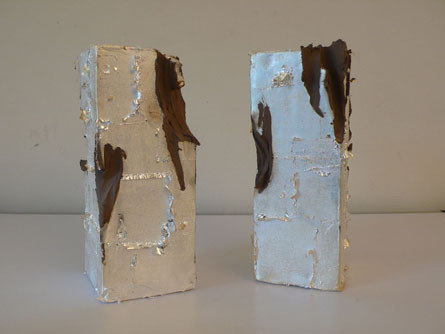 The directors of Thomas Dane Gallery are pleased to announce the first exhibition in London of Belgian artist Michel François. This is a sculpture show. Michel François has produced a body of work which critiques the formal rhetoric of sculpture in an age of installation. In an investigation of the etymology of sculpture through materials, Francois has made sculptures which oscillate between a delicate fragility and industrial resilience. In one room a bespoke shelf skirts three walls at desk height, upon which a seemingly disparate array of forms are placed. From a grill of household aluminium dipped in white plaster to an upstanding metal armature coated in fine polystyrene beads, these table pieces become maquettes, or small scale models made to study the potential of materials.
The main gallery then becomes a laboratory to test how these models react when expanded from their domestic scale: a massive intertwined structure of a single 300 metre long tube will fill the space.

Included in the exhibition is a recent film of a man juggling wine glasses – an exercise in balance and weights and breakages. Materials are pushed and pulled both internally and externally until they reach their critical limit, or at times, their breaking points.Michel François’ sculptures are as much in dialogue with each other as they are with the historic sculptures of Naum Gabo, Antony Pevsver and Anthony Caro and also with the complex conceptual works of Marcel Broodthaers. Questions of the grid are re-opened but only in so much as the grid is there to be collapsed or expanded or functions as a register of density and gravity. The result is a body of works which are neither open nor closed, but stand as sculptural experiments, inviting failure as much as proving themselves.