The monographic show of Zofia Kulik: "Splendour of Myself V (Mother, Daughter, Partner) " presents photographs giving a representative insight in her oeuvre. The project "Oskar Hansen's MoMA" by Calovski and Ivanoska is a study of multiple hypotheses surrounding reading of art historical references. The project is also a reflection on musealization of art and construction of parallel narrations. 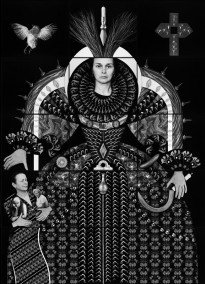 At long last, after her participation at the Documenta XII the polish artist Zofia Kulik received international attention. As many documentation photos have proven, her large-scale photomontages fascinated the public. Her monumental black and white constructions, consisting of a multitude of smaller motifs, connect like a puzzle to reveal the whole image.

The ZAK | BRANICKA Gallery dedicates a monographic exhibition to the photography of Zofia Kulik. These selected works give a representative insight in her oeuvre. For the first time the artist reveals the technical process behind her work, the guarded secret of her large-scale tableau’s: the stencils that she uses during the creation process will be exhibited alongside the finished work. The focus of the exhibition is the monumental work entitled, “Splendour of Myself V” – elements from which are singled out and their meaning described in an accompanying “guide” – an exemplary key to the manifold iconographic and art-historical references in Kulik’s work.

Biography
Zofia Kulik, was born in Wrocław, Poland in 1947. She studied at the Art Academy of Warsaw und finished her studies as a sculptor in 1971. Together with Przemysław Kwiek she founded the artist duo KwieKulik, which existed from 1971 until 1987. KwieKulik became known with arousing and innovative performances. A single archive documents the various works of Polish artists, from Seventies and Eighties, who worked beyond the official cultural scene. Apart from the work with KwieKulik, Zofia Kulik concentrates on the medium of black-and-white photography by creating large-sized photo compositions from numerous small pictures. Thematically, she focuses on the relationship of man and woman, the individual and the mass, as well as on symbols of power and totalitarianism. A further pivotal part of her work is the phenomenon of mass-media, and its influence on consumers. Her work has been shown often at home and abroad. Among these, of special note are her participation at the Biennale in Venice (1997) and the Dokumeta 12 in Kassel (2007).

The project, a hypothetical program of a "lost museum" designed by a Polish architect Oskar Hansen in 1964. Meant to become a symbol of the city's progress and "immortality" following the devastating earthquake on 26th of July 1963, the competition for the best design of a new art institution was organized by the Polish government as a gesture of solidarity and was open exclusively to architects from Poland and other Eastern Block countries.

Oskar Hansen's proposal was based on peculiar assumptions: the museum was to consist of "a transformable exhibition space, able to fold completely and then unfold into various combinations, with hexagonal elements lifted by hydraulically-powered rotating telescopes." In this way the structure would transform in horizontal and vertical dimensions at the same time. In the proposal the architect wrote: "Art in its development is unpredictable. We have assumed that a contemporary gallery should pursue the unknown in art. It shouldn't only aim at exhibiting artworks, but also encouraging and provoking their birth." Hansen's design was not implemented. The jury finally selected a design submitted by a team of three Polish architects: W. Klyzewski, J. Mokrzynski and E. Wierzbicki.

The project by Calovski and Ivanoska is a study of multiple hypotheses surrounding reading of art historical references. It manifests a view on historical analysis involving the documentation of Hansen's proposal and of the possible exhibition and lecture programme that would have engaged artists such as Paul Thek, Mladen Stilinovic, Andrzej Szewczyk, Ana Mendieta, Ad Reinhardt, and others. The project is also a reflection on musealization of art and construction of parallel historical narrations. What would have happened had Hansen's utopian proposal been accepted? What kind of curatorial strategies would have been enforced by the reality of a "foldaway museum"? Can we foresee any artistic reactions to the idealistic umbrella-like platforms that were, after all, supposed not only to host but also to inspire art? These are some of the questions the new work of Ivanoska and Calovski is posing while they fantasize about alternative art history which they construct on the basis of contemporary knowledge of Central and Eastern European avant-garde art.

The poster series "Oskar Hansen's Museum of Modern Art" consist of 12 original posters in limited edition. The posters design was made in close collaboration with young German designer Ariane Spanier

The project is realised in the frameworks of Alphabet - letter S like Skopje by Kronika, Bytom http://www.kronika.org.pl Alphabet is made possible thanks to the financial support by the Polish Institute in Berlin.

Opening reception on Saturday, 5th of April, 6-9 pm
The artists will be present.