The new Norwegian Opera House, designed by internationally Snoarc Architects, opens to the public 12th April. Today 17 artists, commissioned directly or through international competitions, have completed 7 out of 8 highly different projects and will present them. The projects differ widely - some are completely integrated into the structure of the building, some are partly integrated into the building, and others are completely autonomous art works, sited outside the building itself. 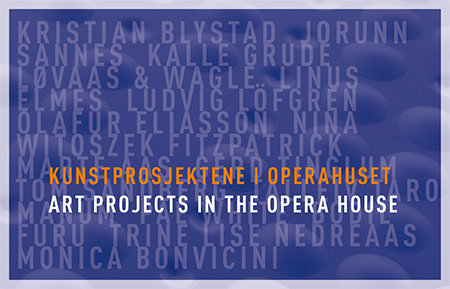 The new Norwegian Opera House, designed by internationally acclaimed Snoarc Architects, opens to the public 12th April. An exclusive presentation of the art works and the artists behind them will take place 7th April.

Kristian Blystad, Jorunn Sannes, Kalle Grude (Norway) – Outer reception area and roof: The project has consisted of working with the Opera’s marble surface as a sculptural form, as a visual interaction, and looking at it in terms of activity and function in close collaboration with the architects.

Lövaas & Wagle (Norway) - Metal facades and stage tower: In collaboration with the architects the artists designed 6000 square metres of aluminium cladding. Stamped concave and convex points create a pattern based upon a woven structure. Eight different panels form a repeat pattern that covers the production area of the Opera House.

Ludvig Löfgren and Linus Elmes (Sweden) – Foundation stone: Hyperoverture – Overtures from 13 operas laid over one another and condensed digitally into a hyperoverture lasting for one minute and forty two seconds. The sound was transmitted through a specially constructed loudspeaker which was directed at a block of wet cement. The impression made by the music upon the wet cement has been integrated into the floor of the public foyer.

Olafur Eliasson (Iceland/Denmark) – Wardrobe volumes: The other wall
consists of 340 square metres of geometric, three-dimensional, pierced panels installed in front of 3 detached cement volumes in the public foyer. The installation includes two lighting systems operating in relationship to one another – when the frontal lighting is increases, the rear lighting dims.

Nina Witoszek FitzPatrick (Poland), Marte Aas, Gerd Tinglum, Tom Sandberg, Talleiv Taro Manum (Norway) – Artist book: SITE SEEING
The construction site was the starting point for the artists, who focused on the themes of time, place and gaze. The project lasted from 2004 – 2008, resulting in a 340 page book with photographs
and texts.

SITE SEEING is for sale in the Opera House, or may be ordered from: http://www.operaen.no

Pae White (USA) – Stage curtain: Metafoil
A photograph of light-sensitive foil was transferred to a loom by using digital technology and woven in matte cotton. An illusion of reflections and forms has been created through the use of colour. From close quarters the surface has a rich texture – from a distance a spatial, metallic composition
is revealed.

Bodil Furu and Trine Lise Nedreaas (Norway) – Film/video
The idea behind the project was a wish to capture something of the atmosphere of the old Norwegian Opera. The works will be presented in the context of an art space not directly linked to the new Opera House itself.

Bodil Furu’s film OPERA focuses on the work that goes on backstage, as well as the architecture of the old Opera.

Trine Lise Nedreaas’ video SWELL follows a playful ballerina as she takes us backstage, into the wings, through the corridors and practice rooms of the old Opera.

Monica Bonvicini (Italy) – Water project: Hun ligger/She lies:
An autonomous, sculptural artwork that will be placed in the harbour basin outside the Opera during the spring of 2009. With reference to Caspar David Friedrich’s painting Das Eismeer from 1823-1824, the sculpture will be an open steel construction, partly covered with reflective, semi-transparent diagonal panels. Weather and lighting conditions will change the sculpture, and simultaneously become part of it.

Some of the artists were engaged directly by the Art Committee for the New Opera House, whilst others were chosen via international pre-qualifying selection processes and competitions. Commissioned by Public Art Norway (KORO).