The retrospective covers a span of thirty years of this Texas native's wide-ranging career, featuring 61 oil paintings and 36 works spanning the late-1970s to the present. Alexander's primary focus began with the landscape, anyway politics and social satire are ever-present themes in his oeuvre. 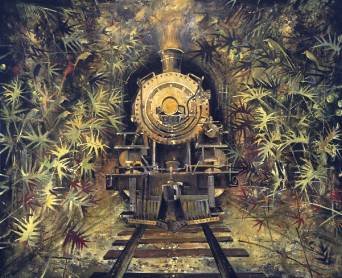 John Alexander: A Retrospective covers a span of thirty years of this Texas native´s wide-ranging career, featuring 61 oil paintings and 36 works spanning the late-1970s to the present.

John Alexander´s primary focus began with the landscape, and the artist has freely disclosed that the Texas of his early years offered him a broad palette, from "rolling hills and pine forests, salt marsh beaches, and dark, murky bayous" to "rocks, desert, and cactus." For Alexander, these landscapes were frequently alive with menace, whether populated by alligators and birds of prey or specters of the Ku Klux Klan. After moving to New York in 1979, Alexander found in his memories of Texas a fresh impetus, as he tapped into local myth and legend in his brilliantly splintered and increasingly abstract compositions. In subsequent decades, Alexander brought a new breadth of vision to his depictions of his immediate environment, from such phantasmagoric paintings as Honkey-Tonk Moon (1989) to his first-hand portrayals of the storm tossed coast of Eastern Long Island, where he now maintains a studio and garden.

Alexander´s travels around the globe continued to expand the scope of his interest in the physical world. The Galapagos Islands, the cloud forests of Central and South America, the African veldt, the Australian outback, and the flora and fauna of these distant lands often find their way into his work. Alexander created Glory Bound (1993) after he explored the jungle in Venezuela. At the center of the canvas an old steam-engine train erupts from a lush tropical forest towards the viewer. Supposedly bound for glory, in Alexander´s lexicon it is a train bound for disaster. A decade before global warming became a common topic, Alexander foresaw the dire consequences of man´s careless stewardship of the earth, finding in technology´s conquest of the new world cause for concern.

Drawings also play a central role in Alexander´s career. Like the great American artists Thomas Eakins, Winslow Homer, and James Audubon, Alexander often focuses on the special character of the landscape´s foliage and inhabitants, and his keenly observed nature drawings stand as one of the fundamental components of the exhibition. A 2002 watercolor and graphite work delicately portrays the prickly leaves and fuzzy flower heads of a thistle with the mastery of Vincent van Gogh´s still lifes, while a watercolor, charcoal, and pastel study of the Saharan marabou stork has the sly wit of a Goya.

Politics and social satire are ever-present themes in Alexander´s work. Alexander´s masterpiece in this genre, Parade (2006), measuring more than fifteen feet across, will have its public debut in Houston. A nightmare vision of global greed, Parade depicts politicians, businessmen, clowns, pigs, sorcerers, and skeletons descending into Hell as paper money flutters down, leading them into the abyss. The exhibition concludes with a timeless image, Ship of Fools (2007), a doomsday scenario that is both apocalyptic and biting.

Ultimately, Alexander´s message is not one of despair however. Once describing his works as "a glimpse of paradise before the wrecking ball hits," Alexander demands that we recognize the worst aspects of the human condition, so that we may strive towards change and redemption.