Prints from Hopper to Pollock 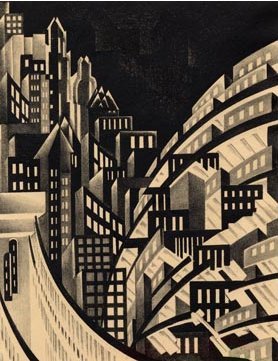 The American Scene will feature spectacular images of American society and culture made during a period of great social and political change from the early 1900s to 1960. Featuring 147 works by 74 artists, the exhibition includes the work of John Sloan, Edward Hopper, Josef Albers, Louise Bourgeois, Franz Kline, Willem de Kooning and Jackson Pollock. This will be the first exhibition in the UK to cover prints from this period for over a quarter of a century, and aims to introduce a new audience to some of the most memorable images of American art when a consciously American subject matter and artistic identity were emerging. The British Museum has the best collection of American prints from the late-nineteenth century up to 1960 of any museum outside the United States.

The exhibition encompasses the arrival of modernism following the landmark Armory Show of 1913, the rise of the skyscrapers as the symbol of modern progress and prosperity, the Jazz Age, the Depression, and the effect of the rise of Fascism in Europe on artists’ political consciousness and engagement and America’s entry into the Second World War. There were many striking images produced during this period, many of them have become iconic within America, but are still relatively unknown outside. The prints have been carefully selected to show the various episodes in American printmaking between 1905 and 1960, as well as providing a visually stunning pictorial anthology.

The exhibition opens in 1905 with John Sloan’s etchings of everyday urban life, marking the genesis of a distinct modern American school, later dubbed the Ashcan School, which launched its first exhibition in New York exactly 100 years ago. The remarkable lithographs produced by George Bellows of prize fights, mental asylums and capital punishment will be displayed alongside remarkable colour woodcuts by women modernist artists such as Blanche Lazzell and Grace Martin Taylor. The inspiration of avant-garde ideas from Paris can be seen in the work of John Marin, Milton Avery, Jan Matulka and Stuart Davis, and the development of the machine-age Precisionist lithographs of Louis Lozowick and Charles Sheeler.

Highlights of the collection include highly evocative scenes of New York at night by Edward Hopper, Martin Lewis and other etchers working between the wars, many of whom had a background in magazine illustration. The urban imagery of these works is contrasted with the romanticised vision of the American Midwest in the work of Thomas Hart Benton, John Steuart Curry, Grant Wood and Doris Lee.

Printmaking was encouraged during the Depression through the Federal Art Project which provided relief to unemployed artists under the US Government’s Works Progress Administration. This particularly helped to establish the screenprint as a new technique for artists, and saw the print reach a wider audience. Robert Gwathmey, Blanche Grambs and Dox Thrash were among the many artists of this period making socially conscious prints.

The political engagement of artists in the 1930s and the response to America’s entry into the Second World War after the bombing of Pearl Harbor in 1941 are vividly expressed by artists such as Hugh Mesibov, Joseph Vogel, Hugo Gellert and Benton Spruance, including his classic image Riders of the Apocalypse. The influx of émigrés from Europe including Josef Albers, who introduced Bauhaus principles to his students at Black Mountain College, North Carolina, and the artistic exchange that took place in Stanley William Hayter’s Atelier 17 in New York are two further episodes in the narrative. Pollock’s first all-over compositions were produced as engravings in Atelier 17 while Louise Bourgeois made her enigmatic series, He Disappeared into Complete Silence, shown in its entirety, also at Atelier 17. The exhibition concludes with abstract expressionism, the first major international art movement generated in the United States. As well as Pollock, other key artists included in the exhibition are Joan Mitchell, Franz Kline, Willem de Kooning, Hans Burkhardt and Emerson Woelffer.

The exhibition is supported by the Terra Foundation for American Art and American Airlines. The exhibition will tour to three venues across the UK after it closes at the British Museum.