A collaborative project that brings together two artists (Angela Ferreira and Narelle Jubelin), an architect (Marcos Corrales) and a curator (Andrew Renton) to create an exhibition. The show seeks to bring unarticulated spaces and stories from the backstage into the foreground, within sight of the front of house. 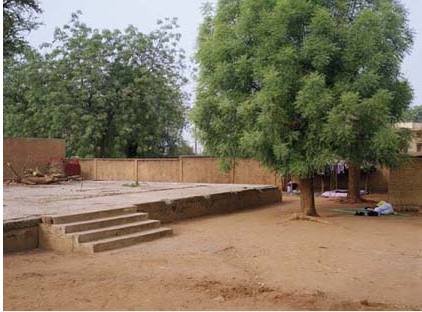 Parasol unit is delighted to present a collaborative exhibition by Marcos Corrales (born Madrid, 1964), Ângela Ferreira (born Maputo, 1958), Narelle Jubelin (born Sydney, 1960) and Andrew Renton (born Manchester, 1963). This will be the first collaborative exhibition by the internationally acclaimed artists, Ferreira and Jubelin, and the first time that Jubelin has exhibited in London since the seminal Hayward Gallery show, DOUBLETAKE: Collective Memory & Current Art, in 1991. Front of House is born out of an ongoing dialogue between the two artists, begun in 1992. Ferreira’s large scale, physical, sculptural practice will be juxtaposed with Jubelin’s diminutive scale and highly detailed works. The exhibition will constitute an interplay involving not just the two artists, but also curator Andrew Renton and architect Marcos Corrales, both of whom have collaborated with the artists, at times, over the past decade. The title of the show refers to the public areas in theatres and concert halls, and the exhibition seeks to bring unarticulated spaces and stories from the backstage into the foreground, within sight of the Front of House.

In the intersecting research and narratives of Ângela Ferreira and Narelle Jubelin, every new work within their respective practices is connected to a previous project, and functions as a temporary pause within a continuing negotiation or conversation. In conjunction with Front of House, a documentary film by Manthia Diawara will be screened. The film relates to Ferreira’s Venice Biennale 2007 project, which examined the journeys made by Jean Prouvé’s Maison Tropicale. Diawara’s film observes Ferreira as she revisits the sites where this modernist icon was formerly installed. In addition Ferreira is developing a substantial new work that revisits the Mozambique of her teenage years by re-modelling an optimistic architectural structure, a broadcasting tower. In Jubelin’s work she is revisiting a more prosaic vernacular, that of her family home, built by her parents in a Sydney suburb in the 1960s. She has used the house before as a model of appropriation and bricolage, as a kind of internationalized adaptation of a Californian bungalow, reworking her father’s photographic documentation of the building process in what she calls ‘sewn essays’, a series of small scale petit-point renderings, that are contextualised within larger architectural display structures. Jubelin recently returned to the house, and has created or accrued a new body of work, in the form of projections, that will mark the evolution of the house and its relation to its environment.

Despite dramatically different styles and approaches, both artists share what might be called a post-colonial experience, Ângela in South Africa and Narelle in Australia. Both artists produce a type of work that engages in an expanded field of critical enquiry that cites histories, particularly of modern and contemporary practice, and how those ideas or objects are transposed and reinterpreted as they travel from one context into another. There are several moments in the work of each artist where we see references to the others, in the form of a revisited narrative or image.

Front of House is the most expanded manifestation of the dialogue between Ângela Ferreira and Narelle Jubelin, although they have appeared in group exhibitions together and have collaborated on one work, Crossing the Line (1999-2008). This will be the first opportunity to explore the extent of their indebtedness to each other, while at the same time making evident that there is a wider collaboration in terms of exhibition practices. At the heart of this exhibition is a conscious desire to foreground the process and participants involved in exhibition making, and embody Renton’s suggestion that ‘there is never a singular work that comes out of nowhere’.

Marcos Corrales (b. Madrid, Spain in 1964) is a recognised Spanish architect who has worked on numerous exhibitions including the Portugese Pavilion at the 52nd Venice Biennale, the Istanbul Biennial in 2007 and Cocido y Crudo at the Museo Nacional Reina Sofia, Madrid in 1994. Ângela Ferreira (b. Maputo, Mozambique in 1958) is based in Lisbon. In 2007, Ferreira represented Portugal at the 52nd Venice Biennale of Art, with the installation Maison Tropicale. Throughout her work, Ferreira scrutinizes the use of theories, in particular art historical theories, and their relationship with and impact on contemporary art, calling on art’s inherent potential to negotiate complex subject matter.

Narelle Jubelin (b. Sydney, Australia in 1960) is based in Madrid. Her work traces the journeys that objects make through the world and the history that accrues to them. Her practice acknowledges that any notion of modernism has been fraught with dislocations, constantly changing and reinterpreting how the work comes to be received in one place or another. Andrew Renton (b. Manchester, England 1963) is Director of Curating at Goldsmiths College. He has lectured internationally and has published widely on contemporary art. Renton has curated many exhibitions in museums across the world, most recently Come, come, come into my world in Lisbon in 2007 and Stay forever and ever and ever at South London Gallery in 2007. Ângela Ferreira and Narelle Jubelin will collaborate on a major exhibition at the Art Gallery of New South Wales, Sydney in March 2009.

First Thursdays Event
To coincide with the exhibition at Parasol unit, Andrew Renton is giving a talk on 1 May, which will draw out themes and ideas present within the exhibition, and discuss the nature of its collaborations. On the first Thursday of every month, art institutions and commercial galleries in East London remain open until 9pm, offering exhibitions and events.