Alongside an hommage to Paula Modersohn-Becker, there is an exhibition featuring the group the Cologne "Progressives"; in a retrospective of the 1920s. This show casts a new look at the group's protagonists Seiwert, Hoerle and Amtz who with their political and artistic movement stood in opposition to the New Objectivity. "Ozurfa", by Matti Brown, is an installation of the unknown Anatolian city Urfa which is overlaid with mythology. 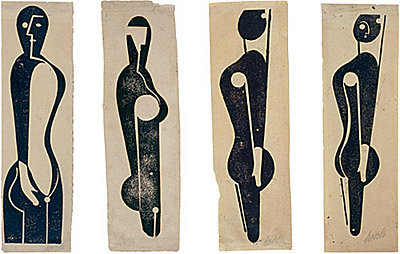 Over thirty years have passed since the Cologne Progressives were last the subject of a large-scale exhibition. Based in Cologne, the loosely organized artistic circle rejected the notion that art stand in the service of radical politics. Instead, they sought a new and unique formal language re-shaped by class consciousness. The end of the Cologne Progressives coincided with the end of the Weimar Republic. During the Nazi period their art was declared “degenerate.”

The Museum Ludwig introduces a new generation to the art of the Cologne Progressives.
With an eye to the leftist political aims of the group, the exhibition is, crucially, an examination of their artistic practice. Critical of the contemporaneous Neue Sachlichkeit, the group looked to modern impulses from France, the Netherlands and the Soviet Union. By focusing on three core members, Franz Wilhelm Seiwert, Heinrich Hoerle and Gerd Arntz, the exhibition will reveal the group’s shared project as never before.

In addition to works from the collection of the Museum Ludwig, over forty paintings and seventy works on paper from an international array of museums and private collections will be on view - some for the very first time. Original issues of their programmatic journal a bis z, as well as key catalogs and documents from the 1920s and 1930s, will point to the group’s motives and their resonance in Germany and beyond.
Until 15th June 2008.

Almost at the same time the Museum is opening Matti Brown’s exhibition project “Özurfa”. In the hallmark approach of this artist, resident in Cologne, he foregrounds in his installation the unknown Anatolian city Urfa which is overlaid with mythology; archaeologists assume the cradle of civilisation to be found there.

A homage on the 100th anniversary of her death.

In 1903 Paula Modersohn-Becker made her second journey to Paris. While in the Louvre, the young German painter chanced upon the mummy portraits in the Egyptian Department. From that moment on she was under their spell. She was fascinated by the “great simplicity of their form” and saw a kinship to her own paintings, which sought a directness that was as close to nature and as artistic, universal and modern as possible. In these mummy portraits she discovered a model whose validity transcended the passage of time. They were almost 2000 years old. Painted between 100 and 300 A.D. in the Fayum valley, the thin wooden boards were placed on the faces of the departed and bandaged up with the mummies — only to be excavated in the late 19th century by scientists and explorers.

News of their freshness, elegance and striking modernity spread quickly. Major museums such as the Louvre and the British Museum bought up whole consignments, and etchings of the antique beauties circulated in large editions, not only among artists. For Paula Modersohn-Becker they became a major source for her portraiture. She adopted the techniques and the way the works framed the image, as well as the posture and gaze of the subjects — using all this to develop her very own style.

A cooperation with the Paula Modersohn-Becker Museum, Bremen