Both artists are masters of emblematic autobiography, and their personas inhabit their work as stand-ins for a generation that came of age and shaped their lives with heightened awareness of certain bands, lyrics, posters, and celebrities. The show's title, Double Album, refers to the exhibition's related yet separate taxonomy and the bridge that music and a shared generation builds between Guzman and Shearer's work. Curated by Richard Flood. 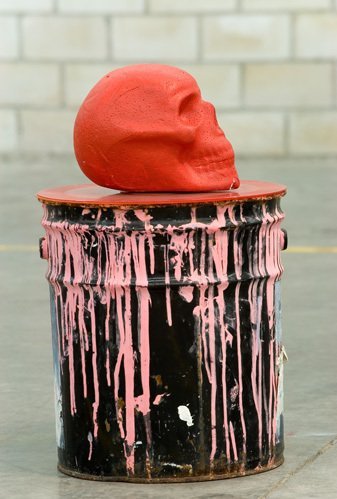 The exhibition is organized by Richard Flood, Chief Curator

This exhibition brings together two artists - Daniel Guzmán (born 1964, lives and works in Mexico City, Mexico) and Steven Shearer (born 1968, lives and works in Vancouver, BC, Canada). Both artists work in a variety of mediums exploring issues of male identity, extended adolescence, rock culture, death, and the seductive ambiguity of self-portraiture. Experiencing their work, one immediately sees a parallel adoption of 1970s and 1980s pop icons and bands as surrogates and personal avatars.

The show’s title, “Double Album,” refers to the exhibition’s related yet separate taxonomy and the bridge that music and a shared generation builds between Guzmán and Shearer’s work.

Guzmán’s sculpture is a natural extension of his drawing techniques. He uses the simplest of materials to sketch a three-dimensional incident and establish encounters with the magic realism of the everyday. In much of his work there are two levels of interpretation - what it is (the sum of its parts) and what it signifies (the poetry of its allusions).

While it is impossible to think of Guzmán’s art outside of the context of Mexico, it is equally impossible to ignore the wider cultural context provided by the United States and the world beyond. It is the ease of his citations (be it William Burroughs or Roberto Bolaño, Bruce Nauman or Kiss) that creates a floating universe of sublimely mismatched equivalencies.

Steven Shearer curates collections. He maintains thousands of digital files from which his art is evolved and created. In service to his work, Shearer harvests the aspirations of those souls wandering on the Web, riffing on air guitars, catching their zzz’s, selling their stuff on eBay, or posing as the stars they yearn to be. From these enormous files, Shearer creates collage accumulations that are epic documentaries of the possessions and the poses of a slacker paradise.

Shearer also paints the ghosts of the Web. His portraits of anonymous adolescents and fallen teen idols are replete with the keyed-up color of the Symbolists whom the artist admires, but they also come with the subjects sheathed in a psychedelic aura that has vibrated around metal bands for decades. It is, in fact, the names and lyrics of metal bands from which Shearer derives the acid-etched poems that are reminiscent of William Burroughs’ cut-up techniques.

Shearer’s sculpture has grown to be an increasingly important part of his work. It comes with narratives that imply design as a tool for character reformation and psychic healing. Like the music Shearer references, his sculpture is both a narcotic promise and a harmonic convergence.