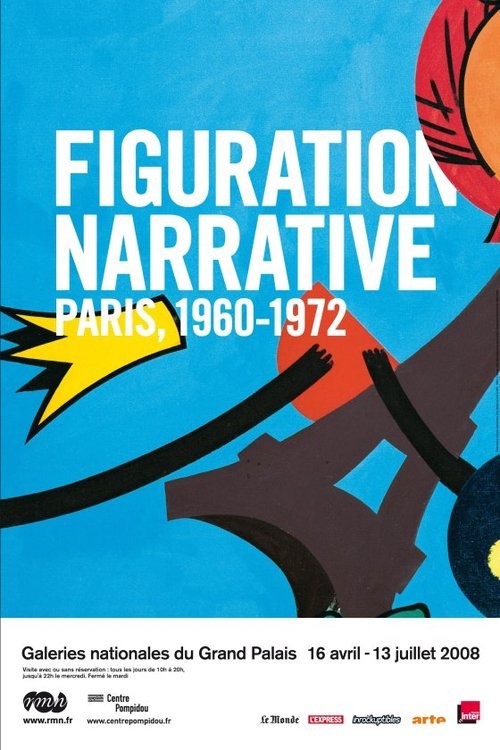 Narrative Figuration was never proclaimed as a movement as such. It grew out of the initiative of art critic Gérald Gassiot-Talabot and artists Bernard Rancillac and Hervé Télémaque who worked together in July 1964 to set up the exhibition “Mythologies quotidiennes” at the Paris Museum of Modern Art.
At a time when Pop Art was triumphing at the Venice Biennale (Rauschenberg was awarded first prize for painting in June 1964) and generally making its presence felt in Europe, “Mythologies quotidiennes” brought 34 artists (Arroyo, Bertholo, Bertini, Fahlström, Klasen, Monory, Rancillac, Recalcati, Saul, Télémaque, Voss…) who, like their American counterparts, put contemporary society and its images at the core of their work.
A few months later, the Salon de la Jeune Peinture was disrupted by the mass arrival of young artists (Aillaud, Arroyo, Cueco, Recalcati, Tisserand…) who had set themselves the goal of making art once more a tool for social change.
Narrative figuration was a powerful force, attracting painters from very different artistic and geographical backgrounds in the 1960s (those mentioned above, but also Adami, Erró, Fromanger, Stämpfli, la Coopérative des Malassis…) who, working from images taken from photography or film, advertising, comic strips or even classical painting, produced works which twisted the original significance of these images and gave them unexpected meanings, suggested other narratives and highlighted their political implications.
Over these years, Narrative Figuration set itself apart from the social neutrality of the Paris school and the formalism of American Pop Art and denounced all forms of alienation in contemporary life. The effervescence of the late sixties led the most militant painters in the movement to take an active part in politics and, in particular, in the events of May ‘68 in Paris.

Exhibition: Bringing together over one hundred paintings, objects or films, “Narrative Figuration Paris, 1960-1972” is an exploration of the sources of the figurative revival which marked the history of art in the sixties in Paris.
The exhibition, which can be seen as the best way to remind the public of the inventiveness of these founding years, reconstitutes the creative environment of these works, which were sparked by the cultural and social ferment of the sixties. Following a dynamic circuit focusing on the major themes common to most of these artists, the exhibition is divided into clearly separate sections.

1) The Origins of Narrative Figuration (Prémices)
2) The exhibition “Mythologies quotidiennes” (1964)
3) Objects and Comic Strips
4) The Art of diversion
5) Painting is a Detective Novel
6) A politic figuration.

Exhibition catalogue: After an introduction by Jean-Paul Ameline, the catalogue gives a chronological history of the Narrative Figuration movement from 1960 to 1972. It is abundantly illustrated with often unpublished contemporary documents and includes a very large anthology of texts and press articles. The anthology records the positions taken by the main actors in the movement: not only the artists, but critics who defended Narrative Figuration (J.J. Levêque, G. Gassiot-Talabot, A. Jouffroy) and its opponents (P. Restany). Lastly, in a series of interviews, nine artists and critics who witnessed the movement appraise it from today’s perspective.
Colour reproductions of all the works are presented in the order of the exhibition.

An exhibition co-produced by the RMN and the Centre Pompidou.
It will be shown at IVAM, Valencia (Spain) 18 September 2008 – 11 January 2009