The new painting on show is the result of a very physical process: part painting, part performance. The expression and relationship of colour is central to his work, and the sourcing and selecting of colour from the world around him is an integral part of the process. 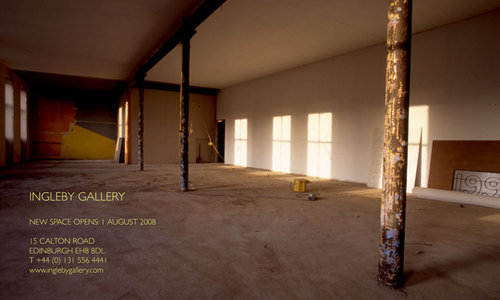 Alongside our usual Bloody Marys, beer & doughnuts will be served in honour of Homer and family at the exhibition opening from 12 noon to 3pm on Saturday 19 April - All Welcome! This is the 21st exhibition in our year long series of 'pairings'. Last year we invited 26 artists to nominate a counterpoint for their own work and this has thrown up some exciting and unexpected collaborations since the series began in July 2007. Some have been about ideas, others purely visual. Some seem chosen with a clear art critical purpose, others are more about friendship. This week's is something different again: Ian Davenport has chosen the cartoon family the Simpsons.

Davenport likes the Simpsons, but not necessarily in the same way as the rest of us. He likes them in that way too of course, but he sees something else there as well which is more often taken for granted. The expression and relationship of colour is central to his work, and as he described in an interview with artist and writer David Batchelor in 2003, the sourcing and selecting of colour from the world around him is an integral part of what makes the paintings come into being - be that the hard and shiny shades of urban life on the streets around his home and studio in East London or, in this instance, the candy-coloured vibrancy of a great episode of his favourite cartoon.

The new painting we will show here is - like all Davenport's work - the result of a very physical process: part painting, part performance. The paint is poured from plastic syringes in tiny rivers down the picture's surface creating a shimmering wall of colours. Put into words it sounds like a simple sequence and the resulting paintings with their seductive shine certainly have an immediate appeal. But they are also more complex than such a basic explanation suggests. Central to their success is the point at which they nearly go wrong: the tension of a line where two colours meet, one threatening to consume the other. They have the presence and power to transform the room they inhabit, giving a different perspective on the space that surrounds them.

It is 15 years since Davenport took part in the legendary exhibition 'Freeze' at Surrey Docks curated by then-student Damian Hirst, and he is one of the now fabled generation of British artists to emerge at that time. He was subsequently nominated for the Turner Prize in 1991 and has since exhibited widely, from TATE Britain to the Reina Sofia in Madrid. He has shown several times at Ingleby Gallery, including a solo show in 2003, his first ever in a private gallery in Scotland.