In situ: paintings 1973 - present. The trajectory of Nelson's artistic development is as muti-faceted as it is focused. The artist uses a humble if more emotionally remote source; a faded color postcard reproduction of an anonymous folk-art rendition of that holiday-season perennial. 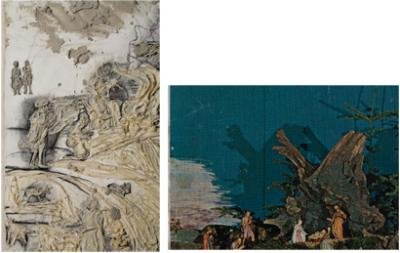 In this survey exhibition of paintings by Dona Nelson, Thomas Erben Gallery revisits and reconsiders the motivations of an artist widely regarded as one of the most vital, intellectually considered, aggressively tactile and physically inventive American painters of her generation. This is Nelson’s second exhibition with the gallery following her critically acclaimed solo, Brain Stain, in 2006.

The trajectory of Nelson’s artistic development is as muti-faceted as it is focused. A true ‘painter’, her insistence on the primacy of this art form goes hand-in-hand with her refusal to slow her exploration of the medium’s potential by resting upon a single style or form.

In small-scaled, minimal works from 1973, we see already inclinations in Nelson’s work to what is self-described as the ‘surreal real’. In particular No title, 1976 (reproduced in Heresies, illustrating Nelson’s 1977 essay Growing up a Painter), unveils the tension between abstraction and figuration which remains a productive source for the artist to the current day. Doretta, 1983, the only portrait on view, is perhaps the most deceptive, being an evocation of cubism with its concern for two-dimensional space while reimbuing the female figure with a sense of presence and identity.

As Brooks Adams wrote in 2003 on the exhibited Pennsylvania Nativity, 2001:

Nelson uses a humble if more emotionally remote source; a faded color postcard reproduction of an anonymous folk-art rendition of that holiday-season perennial. Here a pale, almost marmoreal appearance of the cheese-cloth construction, inflected by graphite shading and acrylic medium in-fill, greatly amplify the postcard’s wan, second-hand image of what appear to be a Greek Revival temple and the figures of the Three Wise Men, somehow seeming to bring us closer to some original devotion.

In Southwestern New Jersey, September, 2003 and April, 2008, the most recent works included, painting bleeds into sculpture and performance most fully. Arising spontaneously through staining and water-hosing the canvases from the ‘back’ the result is a two sided painting, in which both sides are given equal conceptual weight. The experientially physical manner through which Nelson develops her work, pushes our viewing habits beyond the use of signifiers - occasionally present - as an intermediary, towards the dissolution of the classical distinction between mind and body. Depicting all experiences as inherently physical and therefore subjective, Nelson leaves space for us to enter each work imaginatively yet corporeality is implied.

Over the years Nelson’s work has received extensive critical support including numerous reviews in the New York Times, Art in America, The New Yorker, The Village Voice, and Artforum. Her work has been favored and discussed by many notable curators and historians such as Lucy Lippard, Klaus Kertess, Lisa Liebman, and Sanford Schwartz. The Metropolitan Museum of Art, the Weatherspoon Art Museum, the Guggenheim Museum and other notable institutions as well as private collections have included Nelson’s work in their holdings.