Guillermo Martin Bermejo, Anja Ganster, Genevieve Morin, Monika Ruckstuhl. Curated by Anja Ganster, a group show of paintings by four artists that deal with an idea of place or space reflecting reality through some kind of representation. 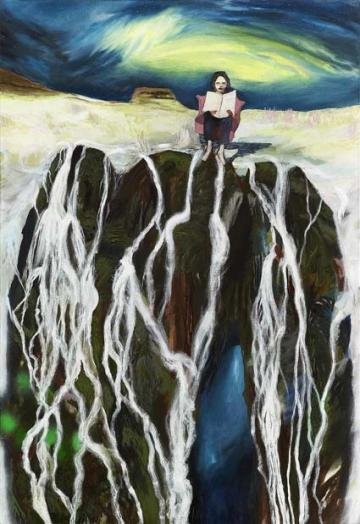 Insight Out, curated by Anja Ganster, is a group show of paintings by four artists that deal with an idea of place or space reflecting reality through some kind of representation. The exhibition questions how, and in which ways, internal processes and worlds can be represented through the language of the image and through the language of a medium and what the work can say beyond the image depicted.

Monika Ruckstuhl (b.1965 Switzerland) lives and works in Basel. Her small-scale landscapes and fading interior scenes portray a calm emptiness of space that keeps the viewer at a slight distance, whilst creating a sense of longing or nostalgia. Her work is loose and abstract, with neither her interiors nor landscapes seeming to follow any logic of form: some works fade away, others build up structures of rocks and snow, all the time using light to blur the boundaries of outward appearance.

Ruckstuhl is a graduate of the Art Academie Basel, HGK Basel and the Staatliche Hochschule für Bildende Künste. Her last solo show was at Galerie Karin Sutter, Basel in 2007. More recently she was represented at the 2008 red bull hangar, Salzburg.

Anja Ganster (b.1968 Germany) lives and works in Basel and Wiesbaden. In the empty but light inhabited spaces in her paintings the viewer has the possibility of seeing a mirror of his or her own internal world. They work on the edge between representation of the image depicted and the abstraction of the painterly language. She deals with artificial, man created and man used spaces and questions everyday reality by investigating momentary sensations, working with layers of light, shadow and colours to create an atmospheric, loaded image.

Anja Ganster trained at the Akademie für Bildende Kunst, Mainz and the Slade, London. Her most recent solo exhibition was with CP Galerie Wiesbaden in 2007. She was the 2006 Artist in Residence, Kulturhaus "Zum kleinen Markgräfler Hof", Basel and her work is in collections nationally and internationally, including the Museum Frieder Burda.

Genevieve Morin (b.1963 Canada) lives and works in Basel. In her emotional landscapes full of creatures and otherwordly figures, fantasies and strange relationships which irritate the viewer, it is unclear as to whether the viewer is witness to an interior or exterior world, whether what he sees belong to a world 'before or behind the retina' [Katrin Dunst, Basel' >.

Morin trained at the Université du Québec à Montréal and the College d'enseignement général du Vieux-Montréal. Her most recent solo exhibition was in 2008 at Gallerie Karin Sutter, Basel. She was a recipient of the Award Werkbeitrag, Kunstkredit Basel-Stadt, in 2006.

Guillermo Martin Bermejo (b.1971 Spain) lives and works in Madrid. In his drawings the piece of paper seems to represent the personal space or some place in life where his dreamlike sceneries have just happened. Disarmingly naïve and free of context they seem, at the same time, charged with a multitude of possible narrative meaning.

Bermejos' most recent solo exhibitions were at Travesía Cuatro, Madrid and "Lost Boys in New York", Nueva York, Intervención, both in 2007. His work is in numerous collections both in Spain and further afield, including the Biblioteca Francisco Javier Martín Abril, Valladolid, Spain and the international collection of the Spanish Embassy.