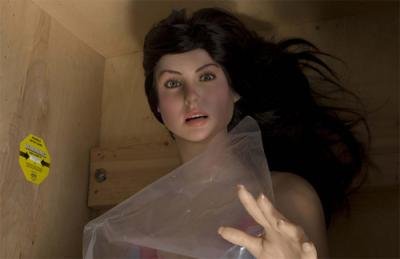 Including the premiere of the sex doll installation, “Olympia: Fictive Projections and the Myth of the Real Woman,” a provocative and updated version of Edouard Manet’s notorious painting, “Olympia”

San Francisco-based artist and filmmaker Lynn Hershman Leeson returns to bitforms gallery in New York for a new solo exhibition, Found Objects, running April 24-May 31. With a body of work that spans over 35 years and ranges from early conceptual and performance pieces to artificial intelligence robotic works and films, Hershman Leeson is one of the most influential artists working in new media today. Updating the notion of “readymade” introduced by Marcel Duchamp, Found Objects is a new series that features assembly-line produced female sex dolls to examine contemporary issues of projected fantasies and the mythology of artificial women. With the installation, “Olympia: Fictive Projections and the Myth of the Real Woman,” Hershman Leeson restages Edouard Manet’s “Olympia,” projecting images of the painting on a doll to offer a provocative, updated version of the notorious artwork. Also on display are several digital prints in which the dolls appear to be emotionally involved in their predestined situations.

In 1865, Edouard Manet’s painting, “Olympia,” shocked the art world by depicting a naked woman who, it turned out, was a prostitute. She lay down, unabashed about what she wanted, looking at the viewer, part invitation, part dare. Incorporating the scandalous history associated with Manet's painting, “Olympia: Fictive Projections and the Myth of the Real Woman” exposes both the cultural practice of representing women as object (lost or found), and an art historical predilection to create objects of displaced desires. Hershman carefully selected the doll’s various body parts so that it would closely resemble Manet’s painting – a process that took 7 months. The installation consists of the sex doll reclining on a longue chaise, exactly as in “Olympia,” while images of the painting are continuously projected on her body. The use of a traditional slide projector displaces and updates Manet’s “Olympia,” thereby creating today’s readymade in a Real Doll version.

The Found Objects series continues the investigation of artificial women Hershman Leeson began with the “Roberta Breitmore” project in the 70’s. As for her preceding fictitious and virtual personas – which included dolls such as “CybeRoberta” (1970-1998) and “Tillie” (1995-98) – Olympia’s true reality surfaces through her artifices. The exhibition will also feature a series of original digital prints that explore the elements of fear and horror, contained in Olympia and brought forth through the photographic medium. These include “No Body,” “Warning,” and “Olympia Rising,” among others.

In conjunction with bitforms gallery’s solo exhibition, 17 pieces from Hershman’s “Roberta Breitmore” series will be on display at PS1 Contemporary Art Center (NY) as part of WACK! Art and the Feminist Revolution – the first comprehensive, historical exhibition to examine the international foundations and legacy of feminist art (February 17-may 12, 2008). Her exhibition “No Body Special” is currently on view at the de Young Museum, San Francisco.