"Hommage a Bleriot" is a painting that unites the lyricism of a simultaneous palette and avant-garde motifs to create a fireworks display of intense colour. This exhibition presents (almost) all of the preliminary studies and versions of the artwork, allowing viewers to consider and compare them. Curated by Roland Wetzel. 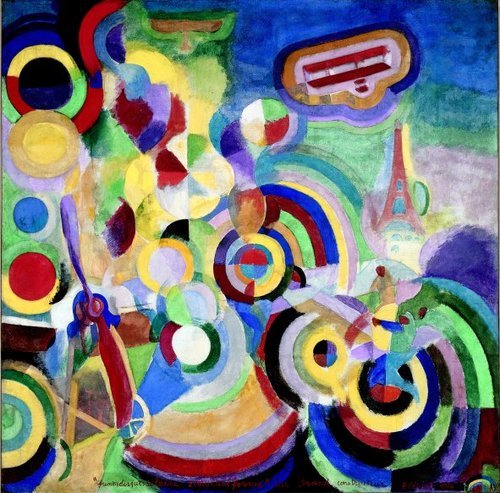 The exhibition focuses on Robert Delaunay’s Hommage à Blériot. The painting is a key work in the artist’s oeuvre and in the Kunstmuseum Basel, where it is a pivot that relates Cubism and Expressionism, two major focuses of the collection. In Hommage à Blériot, Delaunay combines what he referred to as ‘simultaneous’ colour lyricism, which he developed in his abstract work, with representational motifs, to create an intense colourful retinal firework. By dedicating the painting to Louis Blériot, the pioneer of aviation, he taps into one of the main events fascinating the general public in 1910.

Robert Delaunay (1885-1941) is one of the first modern artists to complete the step toward abstraction by trusting to the effects of pure colour and by contemplating these colour effects theoretically. The paintings that Delaunay completed in the years 1912–1914, the window paintings, the Disques and the Formes circulaires, in their abstract conclusiveness, move beyond the work of many of his artist friends. In his oeuvre, Delaunay, a pioneer of the artistic avant-garde in Paris, both treats the prevailing fascination with the accelerated perception of the city as well as the technical achievements that accompany this perception. To convey these he develops a new language.

The exhibition includes numerous sketches, studies and artworks that relate to Hommage à Blériot. Included among these is the second version of the painting, which is now only extant as a fragment, two small format oil paintings and a watercolour. The vocabulary of his abstract work is exemplified in a number of excellent loans, Premier Disque and the Formes circulaires. Soleil et Lune. Furthermore, the exhibition focuses on the Salon des Indépendants, for which Hommage à Blériot was completed and especially on the encounter with Sonia Delaunay’s Prismes électrique from the Centre Pompidou in Paris – one of the highlights in the collaboration of the artist couple.

The historical film sequence of Blériot’s historic cross-channel flight, a room section presenting Chevreul’s colour theory alongside an account of the recently concluded restoration of Hommage à Blériot and a final room with paintings by Wassily Kandinsky, Fernand Léger and the futurist Luigi Russolo round off the exhibition.

This is the first time that an exhibition shows the scope of the series Hommage à Blériot. It also highlights the reciprocal influence between the series of representational paintings and the abstract paintings, on which he worked in parallel. This brings Delaunay into focus as one of the most important protagonists of the avant-garde after 1910 and a trailblazer for many of his contemporaries: a role in which he is to this day underrated.

The exhibition is supported by: Dr. Fritz and Renate Gerber

Numerous events accompany the exhibition. Details available on the webpage