Cosmic Maps. The exhibition is comprised of both new large-scale paintings on paper and a group of signature sculptures. These new paintings, the scale of which are determined by the extent of the artist's physical reach, evoke personal, metaphorical, and metaphysical influences orchestrated through dynamic gesture. 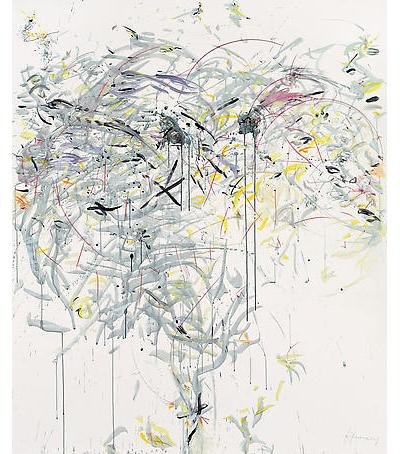 Rebecca Horn's exhibition will be comprised of both new large-scale paintings on paper and a group of signature sculptures. These important new paintings, the scale of which are determined by the extent of the artist's physical reach, evoke personal, metaphorical, and metaphysical influences orchestrated through dynamic gesture. The new paintings on paper clearly relate to Horn's seminal early performance pieces in which she sculpturally extended the body into space. In an accompanying catalog essay Doris von Drathen explains: "Against this backdrop, the paintings on paper assembled here under the title Cosmic Maps are more that just 'recent works.' As a group, these paintings from the last few years plot oscillations, for the first time opening out a pictorial space that hazards to sever all connection to topographical space …."

Rebecca Horn, (born in Germany, 1944), is without question one of the seminal artists of our time. Historically, her work has ranged over an extensive variety of media, including film, performance, installation, photography and sculpture, whilst addressing themes of corporeality, perception and philosophy. The employment of such wide ranging interests as science and alchemy, the rational and the intuitive, the mechanical and the sensual, has occurred repeatedly in her work over the last three decades and has resulted in one of the most distinguished and individual oeuvres in recent memory. Horn has participated in the Venice Biennale on a number of occasions, she has had a retrospective at The Solomon R. Guggenheim Museum, New York and she is one of very few artists who has been selected to participate in Documenta on four separate occasions.

To coincide with this exhibition, the gallery, in conjunction with Charta, has published an important new monograph, Rebecca Horn, Cosmic Maps, with a text by Doris von Drathen. This artist's book features color reproductions of all the paintings on paper from this series as well as rare images of the artist working in her studio. The artist will be available to sign copies of the publication at the opening of the exhibition on May 2nd.