Fashion and Fantasy. The exhibition features approximately 60 ensembles including movie costumes, avant-garde haute couture, and high-performance sportswear to reveal how the superhero serves as the ultimate metaphor for fashion and its ability to empower and transform the human body. The display explores the symbolic and metaphorical associations between fashion and the superhero. 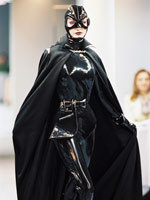 As superheroes enjoy a surge in mass popularity, The Costume Institute at The Metropolitan Museum of Art will explore the symbolic and metaphorical associations between these fictional characters and fashion in Superheroes: Fashion and Fantasy, an exhibition at the Museum from May 7 through September 1, 2008. The exhibition will feature approximately 60 ensembles including movie costumes, avant-garde haute couture, and high-performance sportswear to reveal how the superhero serves as the ultimate metaphor for fashion and its ability to empower and transform the human body. The exhibition is made possible by Giorgio Armani. Additional support is provided by Condé Nast. “Today, superhero imagery has suffused almost every aspect of popular culture,” said Andrew Bolton, Curator in the Metropolitan Museum’s Costume Institute.

“The superhero’s iconic costume of cape, mask, and bodysuit finds many fashionable permutations. But fashion’s embrace of the superhero extends beyond iconography, to issues of identity, sexuality, and nationalism. Fashion shares with the superhero an inherent metaphorical malleability which fuels its fascination with the idea and the ideal of the superhero.” To celebrate the opening of the exhibition, the Museum's Costume Institute Gala Benefit will take place on Monday, May 5, 2008. Giorgio Armani will serve as Honorary Chair of the Gala. Co-Chairs will be actor George Clooney; actress Julia Roberts; and Anna Wintour, Editor-in-Chief of Vogue. The exhibition, in the Museum’s first-floor special exhibition galleries, will include movie costumes as well as radical fashions that literally and figuratively reference superhero iconography, including Bernhard Willhelm’s 2006 royal blue dress emblazoned with Superman’s red-and-yellow “S-shield,” a 1996 Walter van Beirendonck pink vinyl inflatable jacket, and a Thierry Mugler motorcycle bustier with polychrome handlebars and side-view mirrors. A long leather Balenciaga jacket with articulated bronze leggings evokes Iron Man’s metallic skin, while a Jean Paul Gaultier second-skin bodysuit shares The Flash’s streamlined aerodynamics.

Designers in the exhibition include Atair, Giorgio Armani, Balenciaga, Pierre Cardin, Dolce & Gabbana, Jean Paul Gaultier, Eiko Ishioka, Alexander McQueen, Julien Macdonald, Moschino, Thierry Mugler, Nike, Rick Owens, Gareth Pugh, Speedo, Spyder, Three As Four, Walter van Beirendonck, Versace, and Bernhard Willhelm. Objects will be organized thematically around specific superheroes, whose movie costumes and superpowers will be catalysts for discussion of key concepts of superheroism and their expression in fashion. Superman and Spider-Man costumes will address the subject of The Graphic Body, relating Superman’s ‘S’ chevron to designer logos and branding. Catwoman will represent The Paradoxical Body, which will explore the character’s vacillating manifestations of good and bad. The stars and stripes of Wonder Woman’s uniform, a composite of the American flag, epitomize The Patriotic Body and designs that appropriate patriotic emotions implicit in the character. The Hulk, a metaphor for male potency, will introduce a section on The Virile Body, which includes inflatable clothing that swells to exaggerate the male physique.

The Flash – a character who possesses superhuman speed -- will address the Aerodynamic Body as manifest in high-tech sportswear such as Nike’s “Swift Suit” and Speedo’s “Fastskin Suit,” which enhance athletic performance in sprinters and swimmers respectively. Batman and Iron Man will represent The Armored Body, and examine avant-garde fashion that merges mesh and metal, skin and chromium. The Mutant Body, denoted by the X-Men, will highlight clothing that morphs men into beasts. Ghost Rider (the biker-demon with flaming skull) and The Punisher (the vigilante who sports a giant death-skull emblem on his T-shirt) will symbolize The Postmodern Body that suggests an anti-hero identity through the eclectic mixing of street styles.

The exhibition is organized by Andrew Bolton, Curator, with the support of Harold Koda, Curator in Charge, both of the Metropolitan Museum’s Costume Institute. Nathan Crowley, a production designer of films including Batman Begins and the upcoming The Dark Knight, will serve as the exhibition’s creative consultant. A book, Superheroes: Fashion and Fantasy, published by The Metropolitan Museum of Art and distributed by Yale University Press ($50 hardcover and $30 paperback), will accompany the exhibition, and will feature an introduction by Michael Chabon, the Pulitzer Prize-winning author of the 2000 novel The Amazing Adventures of Kavalier and Clay. The design for the 2008 Costume Institute gala benefit will be created by Nathan Crowley with Raul Avila.