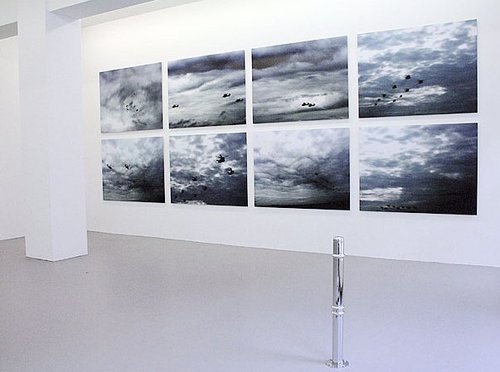 JOEL STERNFELD
THE GEOGRAPHY OF NO PLACE: AMERICAN UTOPIAS

The focus of the exhibition is on selected works of the American Prospects and Sweet Earth series. A special highlight is a large scale photograph from the new series The Field.

The exhibition of these pivotal works permit assessment of a photographer whose contribution to photographic art is profound and far-reaching. As Kerry Brougher states in the closing of his essay Corrupting Photography:

"[Sternfeld's] shift from spontaneous snapshot to pre-determined picture-making helped open the gates for a new type of photography now practiced by Rineke Dijkstra, Andreas Gursky, Thomas Ruff, Thomas Struth, and Jeff Wall, among many others."

In 1978 Sternfeld set out with a large format camera to record the American landscape in ways that it had not been previously documented. The photographs of American Prospects changed the course of photographic practice in significant ways. Sternfeld experimented with color theories conceived originally in reference to architecture or painting and applied them to photography. He brought irony to the centuries-old tradition of landscape painting calling forth a new, postmodern conception of landscape.
Moving high above and back from his subjects, Sternfeld presented the contingencies of human and natural events in the form of narrative tableaux.

Working with new printing techniques that have permitted far greater control, Sternfeld has perfected 42 x 52 inch prints that retain all the qualities of his exacting printing standards but permit a scale that allows fine detail and deep focus.

In Sweet Earth Joel Sternfeld looks at representative historic or present American utopias; a text accompanying the images reveals the historic nature of the site. Sweet Earth brings together what might otherwise seem disparate, individualized social phenomena and makes visible the community of communities.

While the early social theorists were largely European, it was in the fluid environment of young America that true utopian communities were built and utopian experimentation flourished. In the years between 1810 and 1850, hundreds of secular and religious societies bravely tried to build a "perfect" life for their members. In the 20th century, experimentation began again, reaching a fever pitch in the turbulent days of the Vietnam War. Some of the late-1960s communes still survive and continue to flourish. The 1990s and the early years of the new millennium have become yet another hotbed of social experimentation. The co-housing movement is sweeping America with at least 70 communities fully completed and occupied and numerous others planned. At the same time, the rapid global expansion of sustainable communities known as ecovillages has been widely adopted in America.

Sternfeld's photographic tour of America is a search for the truth of a country not just as it exists in a particular era but as it is in its ever-evolving essence. It is a sad poem, but also a funny and generous one, recognizing endurance, poignant beauty, and determination within its sometimes tense, often ironic juxtapositions of man and nature, technology and ruin.

For further information about the artist and images of the works don't hesitate to contact the gallery.

We will present new photographic works by the Berlin-based German artist Bettina Pousttchi, who is currently working in London for several months at the invitation of the University of the Arts.

The four large-format photographs in this exhibition (180 cm x 225 cm each) are the first works to have been produced in London. Taken on the streets of London, the motifs have an indexical ambiguity that is typical of the artist's approach to photography. The atmospheric blurriness is heightened by the horizontal stripes added by digital editing. The semantic charge of this cinematographic sequences produces a condensed space of association that recalls mnemonic images.

Even the exhibition's title, Tomorrow Was Yesterday, makes it clear that the artist's concern in these works is the relativity of the perception of time, particularly in relation to the photographic and cinematic image. Yet these "time images" also have a poetic dimension where the levels of the real, the symbolic, and the imaginary seem to overlap.

For some time now, the artist has been working with the interim space between the moving and the still image. In her photo series and videos, she blurs the boundaries between cinematic experience and the photographic moment. The points of intersection between media, form, and content interest the artist in terms of the way they formulate the question of the representation and relativity of the visible and thus undermine established orders of the gaze. It raises the questions what "reality" is, how it can be depicted, and how we perceive it.


An extensive survey of the artist's work was recently on view in the Von der Heydt Museum / Kunsthalle Barmen in Wuppertal. In July the Museum on the Seam will exhibit a large selection from the Parachutes series of photographs in the exhibition Heartquake. The artist will also participate in this year's Rohkunstbau exhibition in Potsdam, which will be held from July to October in the Villa Kellermann and whose theme is "Three Colors: Red, Fraternity."

The artist's grant to work in London will continue to the end of June and will then finish with a solo exhibition in London in the fall.

For more information on the artist, please contact the gallery.