Rauschenberg's travels in the 1970s took him to Italy, France, Jerusalem and India. The series presented here, which were created on, or immediately after these trips, exhibit exceptional simplicity, and brilliance, utilizing new materials and techniques. During this period Rauschenberg created works made of cardboard, fabric and found objects. In all 5 series on display he addresses the classic problems of painting, such as composition, color and texture, as well as those of sculpture, such as weight, balance and the placement of the object in space. 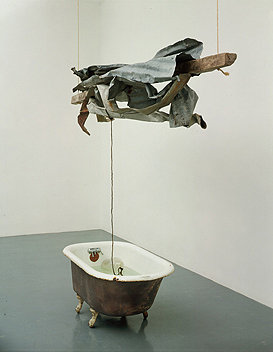 The exhibition unites a selection of works from the series 'Cardboards,' 'Venetians,' 'Early Egyptians,' 'Hoarfrosts' and 'Jammers.' Rauschenberg's preoccupation with other cultures, as well as experiences from the various journeys he took are reflected in these pieces, which were created between 1970 and 1976. For the first time, these work groups in Rauschenberg's œuvre, which have been largely ignored up to now, are receiving the acknowledgement they deserve.

Rauschenberg's travels in the 1970s took him to Italy, France, Jerusalem and India. The series presented here, which were created on, or immediately after these trips, exhibit exceptional simplicity, liveliness and brilliance, utilizing new materials and techniques. During this period Rauschenberg created works made of cardboard, fabric and found objects. In all five series he addresses the classic problems of painting, such as composition, color and texture, as well as those of sculpture, such as weight, balance and the placement of the object in space, with his typical inventiveness.

Rauschenberg used only found bits of cardboard in this series created between 1971 and 1972. His decision to restrict his materials to cardboard and cardboard boxes coincided with his move to Captiva Island in southern Florida: following a very successful period in New York, Rauschenberg was looking for new ways to concentrate; the move took place in 1970 and the artist was looking for a material that he could get anywhere in the world for his new series: "I still haven't been anyplace where there weren't cardboard boxes ... even up the Amazon." (Rauschenberg 1991)

Rauschenberg was the first artist to use only cardboard for large format assemblage paintings, sculptures and installations without treating it as painterly decor or subjugating it in any way. He discovered the expressive quality of packaging materials and united the language of formal abstraction with that of real life while completely preserving the material's character. It was precisely this material, which is usually discarded, on which he concentrated his attention: "... A desire built up in me to work in a material of waste and softness. Something yielding with its only message a collection of lines imprinted like a friendly joke. A silent discussion of their history exposed by their new shapes. Labored commonly with happiness. Boxes."

The 'Cardboards' tend to be monochromatic. Rauschenberg continues here in the vein of the pure black and white paintings of his early years. In this way the traces on the boxes left by use are strongly accentuated: labels, printed words, imprints from soles and fingers, as well as various kinds of damage marks. These traces superimpose one another and provide information about the box's history. As a universally available material, cardboard boxes also represent the gradual conformity of the world under the conditions of capitalistic overproduction.

The 'Venetians' were created during 1972 and 1973 in Captiva after a travel to Venice. For this series, Rauschenberg primarily used mass produced materials and discarded household objects: fabric, rope, wood, leather, stone, electric cable and wire, chairs, vases, pillows, an old bathtub, water and scrap metal. The 'Venetians' are more sculptural than the earlier 'Cardboards' and less abstract. Characteristic is their reference to Venetian imagery, which, however, is not purely representational. The objects retain their independence and identity and the analogies to the city's appearance are primarily formal. The viewer, for example, mentally transforms a fragmented inner tube into the outline of a gondola and a piece of wood into a gondolier's oar ("Untitled [Venetian]", 1973).

Rauschenberg was a frequent visitor to and repeated participant in the Venice Biennale. He was one of the first artists to make the city's distinctive character the subject of his work: the halt of time in the lagoon, the city's unfailing appeal despite the gradual decline of its beauty. In this series Rauschenberg returned to his assemblages, to the juxtaposition of materials and found objects as they had once characterized his combines. The title of the work, "Sor Aqua", (1973) quotes the Cantico di Frate Sole by St. Francis of Assisi, one of the earliest pieces of Italian literature. The four elements form two sets of siblings: Brother Sun and Sister Moon, Brother Fire and Sister Water. Frate Sole is the symbol of enlightenment through God. In Rauschenberg's work bent pieces of metal hang above a filled bathtub reflected in the water like clouds. The incidental light is also mirrored in the water.

The series 'Early Egyptians' was created in 1973 and 1974. Cardboard is once again the dominant material, although the way it is treated here is significantly different: The cardboard boxes are not flattened or cut but are almost always used as constructive elements in these large-scale works. Rauschenberg, not without a certain irony, covers the cardboard boxes with glue and then either rolls them in sand or wraps them in gauze, like mummies. By painting the backs of the boxes with phosphorescent ink he creates a halation on the wall, as if the objects were casting artificial shadows there. "I cover them with a special material, as if it were glue. Then I line them with two or three layers of sand. This was, when you think that they are boxes, they seem like stones. Then after having thought that they are stones, you go back to the first impression. They are not stones! You think again that they are boxes. This ambiguity is what I like. Then I paint their back surface so that they reflect the color on the walls. Like stones that have fallen asleep within a rainbow."

Part of the series was executed in Captiva, part in Paris. Rauschenberg's preoccupation with ancient Egypt was inspired in part by reading material and in part by visits to the Louvre; Rauschenberg had never been to Egypt. While the 'Venetians' are lightweight and almost choreographic, the 'Early Egyptians' suggest weight, even when devoid of it. Rauschenberg creates a monumental effect, which he undercuts at the same time. In this way the works confront the viewer with the question of transience and continuity.

For the 'Hoarfrosts,' executed in 1974 and 1975, Rauschenberg used fabric in place of traditional canvas supports. The title is a reference to Dante's Inferno, which Rauschenberg had already illustrated in the 1950s with a series of transfer drawings ("Inferno", 1958/60). Accompanied by the poet Virgil, Dante descends into Hell, enveloped in mist and frost: The beginning of the 24th canto states: "What time the hoarfrost copies on the ground / The outward semblance of her sister white."

The technique and content of this series are linked to earlier works. Rauschenberg noticed that the gauze used to clean the stone slabs in lithography retained traces of the newsprint. By using a solvent, which allowed images to be transferred onto fabric, the artist created a series of works on transparent or semi-transparent fabric; he transferred images from newspapers onto silk, cotton and chiffon. In most of the works several layers of printed fabric overlap, creating delicate palimpsests of great depth and elegance. Neutral colors dominate the works at first, although brighter colors are gradually incorporated.

The 'Hoarfrosts' tell of disintegration and states of suspense, of concealment and transparency, "presenting the imagery in the ambiguity of freezing into focus or melting from view." (Rauschenberg)

In 1975 Rauschenberg worked for a month in an ashram in Ahmedabad, India, a center of textile production. After returning home, he executed a series of works in 1975 and 1976 called the 'Jammers,' which were true bursts of colors. "I never allowed myself the luxury of those brilliant, beautiful colors until I went to India and saw people walking around in them or dragging them in the mud. I realized they were not so artificial." The fabrics used in these works are rectangular, square and triangular in shape and their colors are clear and intense. They are hung either loose on the walls or are attached to bamboo rods like veils in a state of ethereal equilibrium.

The series' name comes from the Windjammer, a sailing vessel, and the titles of the individual works, such as "Pilot" and "Sextant", emphasize the maritime reference. The 'Jammers' are reminiscent of sails on ships, of windbreaks on the beach, of laundry, drying on clotheslines in southern Europe and Asia, of medieval Italian banners or the flags of a Tibetan monastery. The exotic is connected to everything that is close and approachable, the holy with the worldly. As with the Venetian series, the 'Jammers' display the dual qualities of reference and abstraction. The exhibition is curated by Mirta d'Argenzio. Its international tour has been organized by the Fundação de Serralves, Museu de Arte Contemporânea, Porto, and is co-produced with the Haus der Kunst and the Museo d'Arte Contemporanea Donna Regina (Madre), Naples.