British Sculpture from the Sixties and Seventies. A Tribute to Bryan Robertson at the Whitechapel. This exhibition is an opportunity to introduce one of the most important movements of British sculpture to a new audience and also an occasion for those who remember the work to revisit it. Works by David Annesley, Michael Bolus, Phillip King, Roland Piche, Tim Scott, and others... 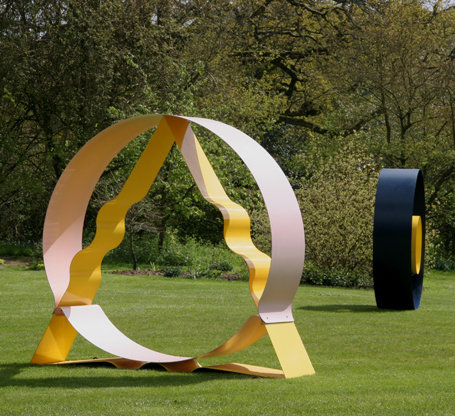 The New Art Centre is pleased to announce a major new exhibition of British sculpture from the sixties and seventies, sited throughout the sculpture park and the two award-winning exhibition spaces. This exhibition will be an opportunity to introduce one of the most important movements of British sculpture to a new audience and also an occasion for those who remember the work to revisit it. We are showing sculpture by David Annesley, Michael Bolus, Phillip King, Roland Piche, Tim Scott, William Tucker and Isaac Witkin, as well as work by Antony Donaldson, Francis Morland and Jules Olitski.

The exhibition will be a tribute to Bryan Robertson who was perhaps the most inspirational and far-sighted curator of his day; he was a frequent visitor to Roche Court. Bryan Robertson ran the Whitechapel from 1952 to 1968, and was described by Studio International as "the greatest director the Tate Gallery never had". His show New Generation in 1965 was responsible for introducing a group of sculptors who broke new ground exploiting revolutionary technologies and innovative acrylic paints to explore the relationship between colour and form.

Many of the artists studied at St. Martin's during the 1960s. Their teacher was Anthony Caro, and their innovative sculpture often reflects the principles of Caro's work of that time: simple elements arranged in an open form; sculpture which stand directly on the ground with no regard for a formal front or back, constructions on a comfortable human scale. William Tucker acknowledged the debt to Caro: "I think he has made it possible for us to make sculpture in a way that we couldn't have done had he not existed."

Many works have been restored especially for this exhibition, making this a unique opportunity to see iconic works from a revolutionary era, brought together again four decades later in the rural setting of Roche Court.

A colour, illustrated catalogue, with an introduction by Ian Dunlop and an essay by Hester R. Westley, will accompany the exhibition.