Open everyday except mondays, from 3 to 7pm 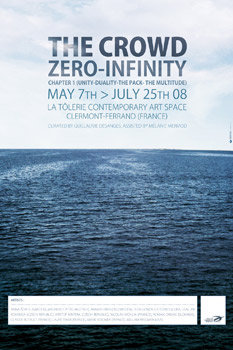 In the lineage of works by Elias Canetti, the motif of the crowd as an echo of the political notion of community can extend to the history of forms. Conceptually, the crowd results from the paradoxical formation of a "collective individuality," a physical gathering of units momentarily sharing a common goal. As a group capable of reaching the "innumerable," the crowd fascinates as much as it frightens through its physical monstrosity and immeasurable power. From a more formal point of view, the crowd's motif refers to the representation of a whole as a sum of specific elements, therefore to the idea of fractals. It also relates to the ornamental tradition of the grotesque, as a chaotic succession that gives a form of order to disorder. An investigation of the crowd, the mass, or the multitude cannot be made without considering the necessary counterpoint: absence, void, the isolated individual facing the world, and his/her relationship to otherness and the group. Therein lies the first stage in the constitution of a community. From this perspective, The Crowd (0-infinity) is constructed according to a continuous script that leads from the one to the multiple.

The first chapter of this evolving exhibition project voluntarily excludes any representation of human crowds. It approaches this complex theme in an abstract, paradoxical manner. The choice of the art works is more sensory than illustrative, more formal than figurative, more intuitive than manifest. The monochrome is thought of as an erasing of the subject. Chaotic or falsely controlled multitudes – including organic or social structures that operate like the "crystals of masses" – develop embryos of unit behavior. The issue is to challenge the image of the crowd in a sensitive manner, shedding some light on precarious ties between art works that individually escape thematic circumscription.

In a time of political and economical celebration of the individual dimension as an absolute value worldwide, when forces of opposition focus on the recognition of minorities and localized micro-resistance, the crowd, the multitude, the mass may be more subversive than it appears at first sight. This is what the exhibition wishes to incrementally measure.

Located in the historic and industrial district of the city, La Tôlerie Contemporary Art Space is a former garage renovated by the City of Clermont-Ferrand in 2003 as an instrument for the exploration of contemporary creation. Every year a resident curator is invited to imagine and organize a specific program. Guillaume Désanges, art critic, curator and co-founder of Work Method, an independent production structure, is guest curator for 2007-2008.