The exhibition includes paintings, sculptures, installations, films, text works etcetera by some thirty artists. The display attempts to show art as turbulence. Art as a spontaneous and non-hierarchical collaborative installation. Art as a chaotic stage where genres and expressions are installed next to, and overlapping each other. Works by: John Bock, Jean-Marc Bustamante, Marcus Coates, Urs Fischer, Peter Fischli/David Weiss, Olivier Garbay, Gelitin, Douglas Gordon and many others. 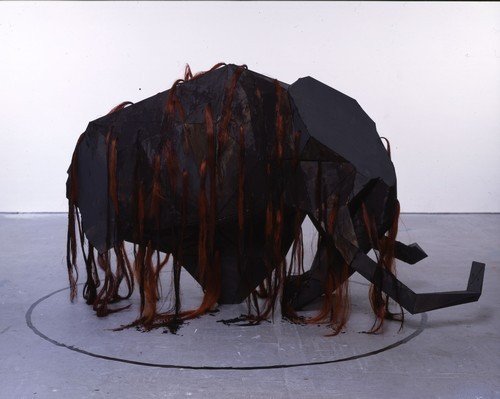 The Hamsterwheel is an exhibition initiated by the Austrian artist Franz West, and was originally presented at La Biennale di Venezia, 2007. The exhibition includes paintings, sculptures, installations, films, text works etcetera by some thirty artists. The video works are selected in collaboration with Veit Loers. The exhibition has since then travelled to the Festival de Printemps de Septembre, Toulouse, and Centre d’Art Santa Monica, Barcelona. At each exhibition venue the presentation of the works and relation to each other changes dramatically.

Hamster wheels are exercise toys used by hamsters and other rodents. Hamster wheels allow rodents to run even when their space is confined. It is a movement that does not go anywhere and which does not intend to. Moving just for the sake of moving. Moving due to the need to do so – for example as we humans do in fitness centers (some machines even include televisions for our entertainment).

“As a title The Hamsterwheel is really about play. It pokes fun not only at the art scene, but also at the artists themselves. We're all scurrying around at breakneck speed and getting nowhere at the same time [….] a giant new game was set in motion each time, without curator's directives, just from of our own auto stimulation.“ Jean-Marc Bustamante, April 2008.

The Hamsterwheel can be seen as a playful comment to the wheel of life – the life as an artist. A wheel where we struggle to go forward, to get ahead. That always takes us forward, and still – at the end – nowhere. The exhibition attempts to show art as turbulence. Art as a spontaneous and non-hierarchical collaborative installation. Art as a chaotic stage where genres and expressions are installed next to, and overlapping each other.

The fine arts are increasingly subjected to the torment of interpretation and group exhibitions are usually held pursuant to a recognisable plan; illustrating a purpose, elucidating a theme, or serving a motto. The Hamsterwheel puts the question of art’s meaning to the test.

The exhibition brings together artists whose works are connected in cryptic ways. Is it chance that brought them together? Serendipity? Old Boys’ networks? Pitfalls along a career trajectory between dementia praecox and dementia senilis? Contexts, in any case, reveal themselves when concrete life situations are being looked at, bringing together artists from various directions. The works are meant to develop their aura on the basis of, precisely, a lack of thematic connections. No selection has been made on the grounds of present criteria. Artists selecting other artists, friends, curators, according to their own lights, whims, predilections, and discretions, as they saw fit for this exhibition. Encounters between the artists and their works are the most important issue in The Hamsterwheel.

Throughout Franz West’s artistic practice the viewer’s participation is important, and encouraged to handle and interact with his sculptures. In The Hamsterwheel West himself participates with sculptural sitting arrangements, which also poke fun and contradict his own title – since the act of sitting (enjoying the other artists’ work in the exhibition) is far from the endless motion of The Hamsterwheel.