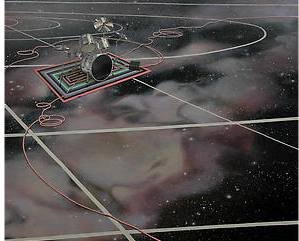 Mark Moore Gallery is pleased to present new work from British painter Simon Willems. Taking its title from the name given to New Age meditation music, Cloud Music will act to expand on earlier themes within Willems' work that pertain to the notion of, as he terms it, "contemporary vulnerability". Willems' ironic re-appropriation of the title alludes to his concern with mock existentialism, cultural indoctrination and the creation of new meanings. His subject matter largely focuses on the escapist locales and objects upon which contemporary culture fixates; yet often in states of abandonment and disrepair. The largely muted palate Willems' employs echoes his depleted subject matter, while pops of color act as a reminder of what was hoped for, or hint at what might yet be salvaged from the ruins.

Willems' combination of surreal scenes and failed utopias with somewhat absurd pop music references create witty existential clichés. The subtle humor of which creates a sense of mocking, poking fun at contemporary society and the way in which it flails to make sense of itself through any and every means within reach. While it lacks any self-awareness, as the oblivious figures he depicts testify. Simon Willems received his BFA from Nottingham Trent University in Nottingham, UK before moving on to receive his MFA from the Royal College of Art, London, UK in 2000. His work has been exhibited internationally and on both the East and West Coasts of the USA. This year alone he will have solo exhibitions in Los Angeles, Paris and London. Cloud Music will be his second solo show at the Mark Moore Gallery. Simon Willems lives and works in London.

The Mark Moore Gallery will produce a catalog to accompany Cloud Music. In our project room, Mark Moore Gallery is pleased to present new work by young artist Kiel Johnson. Hyperbole Studios, the encompassing name Johnson gives to his creative projects, gives some insight into the intention of his work. He is largely concerned with the dynamic between the factual and the fictitious. Exploring the middle ground between the two, he creates caricatures of reality, cartoon like systems that function yet seem as though they should not, and vice versa. Johnson plays with our expectations of logical mechanisms in order to prompt the viewer to ask questions, although, as he says, 'not deep, analytical questions, but strange, funny questions'.

The relationship between Johnson and the crowded and impacted Port of Long Beach (where his studio is based) has influenced his 2D and 3D work as he addresses the nature of commerce and the individual. His interest in the dynamic between the alienation of the individual and the overabundance of things in the world fuels his curiosity about how things work and the physical mapping out and making of things (both real and imaginary). Johnson creates playful, whimsical art with an edge. His personified works appeal to the viewer with their sense of fun but, like the hidden mechanics that make them work, reality is just below the surface.

Kiel Johnson received his BFA from the University of Kansas, Lawrence, KS before completing his MFA at California State University, Long Beach, CA. His work has been exhibited widely across the United States, including at MOCA Geffen Contemporary. This year he was awarded the Pollock-Krasner Grant. This show will be his first solo exhibition at the Mark Moore Gallery. Kiel Johnson lives and works in Long Beach, CA.