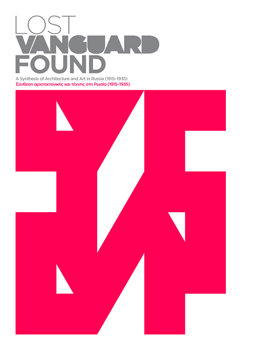 Constructivism made its appearance in the early 1920's and is the last major movement within the Russian avant-garde. Derived from the Latin word “constructio” which means construction, underlines the beginning of the artistic installation and is connected with the name of the profound artists Vladimir Tatlin, who created his so-called counter-relief works between 1914 and 1917. The use of industrial materials and the insistence on pure texture (pure material) were the main elements in the creation of works which seemed to be introducing an art of functional value. Thus, the constructivist artists’ designs lie beyond the conventional borders of the canvas and they reach out applications within the urban natural environment, related to the architects’ and mechanics’ experimentations. The exhibition under the title “Lost Vanguard Found: A Synthesis of Architecture and Art in Russia (1915-1935)” is a proof to the above mentioned and is hosted at the premises of the State Museum of Contemporary Art from May 9th until September 28th. The exhibition is a production of the S.M.C.A. - Costakis Collection with the collaboration of the Schusev State Museum of Architecture in Moscow and the Thessaloniki Museum of Photography. The exhibition is presented as part of the parallel programme of the Photobiennale/ 20th Photography Meeting 2008

The Director of the State Museum of Contemporary Art, Maria Tsantsanoglou -who is the co-curator along with David Sarkisyan (Director of the Moscow State Museum of Architecture) and Hercules Papaioannou (curator of the Thessaloniki Museum of Photography) noted: “The exhibition presents for the first time in Greece the history and reception of Russian constructivist architecture as well as the correlation of painting and architecture through the prism of new visual aesthetics, aiming at its application to architecture. Thus, the artists’ drawings fit organically in their natural urban environment. The first part of the exhibition “Lost” consists of documentary material from the Moscow State Museum of Architecture. In the second part of the exhibition under the tile “Vanguard”, representative works of the Costakis Collection are shown with emphasis on the constructivist movement. While, in the third part with the title “Found”, the famous photographer Richard Pare is bringing into light whatever has been survived nowadays from the Russian architecture avant-garde through his 81 photographs. Thus, the exhibition is the result of a very essential scientific research which has been conducted from three different sources: the Schusev State Museum of Architecture in Moscow recorded a unique documentary archive, the photographer Richard Pare travelled through the ex Soviet Union and recorded with his camera the recent conditions of the buildings creating a unique archive which rises issues on the way in which we ought to deal with the contemporary monuments. From its part, the State Museum of Contemporary Art records and presents for the first time all the material from the Costakis Collection, which consists mostly of small drawings which state the relation between the artistic innovative creation and the architectural avant-garde.”

Collaborators:
Schusev State Museum of Architecture in Moscow
Thessaloniki Museum of Photography
Richard Pare, Photographer
In the framework of the parallel programme of the Photobiennale/ 20th Photography Meeting 2008