The Vollard Suite: an exhibition of a hundred intaglio prints. The serie is named after the famous French art dealer, Ambroise Vollard, and is generally grouped into 5 categories: The Sculptor's Studio, The Battle of Love, Rembrandt, The Minotaur and The Blind Minotaur. 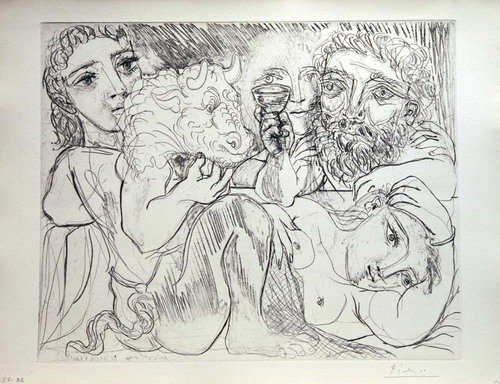 The Consulate General of France in Hong Kong and Macau and The University Museum and Art Gallery are delighted to present "Pablo Picasso: The Vollard Suite", an exhibition of a hundred intaglio prints by the great artist, Pablo Picasso (1881–1973). The Vollard Suite is named after the famous French art dealer, Ambroise Vollard (1867–1939) who worked for Picasso until 1910. In 1930, Vollard commissioned a hundred prints from the artist, which were completed in 1937 and given to master printer Roger Lacouriere to print. Vollard died in a car accident in 1939 and the prints were kept in his storeroom until 1948 when the Parisian dealer, Henri Petiet bought them. Petiet felt the prints were of such a diverse nature that he sold them in groups or individually. It was not until 1956, when the Swiss book dealer, Hans Bolliger, published them in book form that scholars began to consider the prints as an integrated set.

The Vollard Suite is generally grouped into five categories: The Sculptor's Studio, The Battle of Love, Rembrandt, The Minotaur and The Blind Minotaur. In addition, there are twenty-seven prints on disparate themes, including three portraits of Ambroise Vollard. The prints are characterized by an emphasis on classical and neo-classical subjects. Archetypes from Greek mythology, such as the Minotaur and Pygmalion were depicted and reinterpreted to reveal Picasso's thoughts on the relationship between the artist and his creativity, and the artist and his model.

In the Vollard Suite, the most commonly used printmaking technique is etching, as well as drypoint and aquatint. Etching uses acid to etch the design onto a metal plate, while drypoint uses a sharp metal point to incise directly onto the plate. Aquatint creates a tonal effect by using fine particles of resin; two of the portraits of Ambroise Vollard have been executed in aquatint.

Picasso used precise and simple lines to create these imaginative and characteristic works. The Vollard Suite is regarded as the most remarkable set of prints by Picasso. On Saturday 17 May, Pascal Torres, curator of the chalcographic department of the Louvre Museum, Paris will give a lecture on the Vollard Suite (in French with simultaneous translation in English), at 3 pm at the Museum.

University Museum and Art Gallery - UMAG
94 Bonham Road, Pokfulam (University of Hong Kong)
The opening hours of the Museum are 9:30 am to 6:00 pm Monday to Saturday and 1:00 to 6:00 pm on Sundays. The Museum is closed on University and public holidays. Admission is free.