Prefabricated Building System. The show presents an exciting chapter in the artist prolific oeuvre, focusing on his ventures in architecture. The exhibition critically examines a particular architectural project for a prefabricated mass housing system, which Maciunas drafted in the late 1950s. 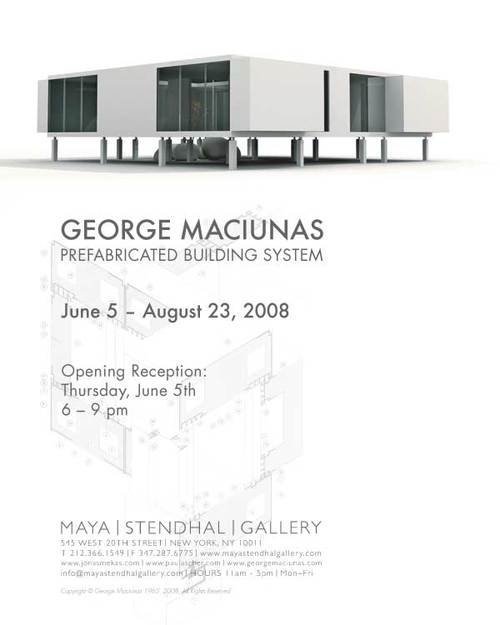 George Maciunas Prefabricated Building System presents an exciting chapter in artist George Maciunas’ prolific oeuvre, focusing on his ventures in architecture. The exhibition critically examines a particular architectural project for a prefabricated mass housing system, which Maciunas drafted in the late 1950s and developed toward utopian ends through 1965. His original plan has been thoroughly researched and put to the test in the form of a three-dimensional model, which will be unveiled for the first time. The exhibition gives new understanding to the artist’s progressive ideas on art, architecture, and design and their capacity to have bearing on broader social and cultural issues.

The presentation as a whole discloses defining features that set Maciunas’ dwelling apart from most prefabricated house experiments. Emanating throughout the entire structure is an adept mixing of functionalist concerns with a breathtaking poetic, sculptural and spatial beauty, and a sense of the spiritual.

Observing the building plan’s simplicity of composition in relation to Maciunas’ very particular notions on form, function, economy, and efficiency informing the presentation, it becomes apparent that he was steeped in the latest theories and technical developments. A standard method of joinery, for example, indicates that Maciunas formulated his plan with real factory production in mind. Designed for quick and easy assembly with a minimum number of components necessary, the structure requires no heavy machinery, and can be erected using local, untrained labor. Its great flexibility of form and material means that it can function as a residential, institutional, industrial, or agricultural building, and that it can adapt to specific topographical and climate conditions. The structure can change shape and size according to most any external site restrictions, while also meeting the needs and facilitating the routines of those working or living inside. Durability is another distinctive feature. The system as a whole is able to withstand natural disasters such as hurricanes, earthquakes, and floods. Predating today’s eco-minded homes, Maciunas’ dwelling allows the inhabitants to control the admittance of solar light and warmth, simply by shifting a wall panel. Maciunas’ prefabricated housing system, in form, function, material, and flexibility, resonates in a contemporary culture that thrives on utilitarian, mass-produced products made to meet the varying needs of the individual consumer. Not surprisingly, “cultural entrepreneur” was one of the many titles given to Maciunas during his career.

It was realized early on that a curatorial project of this magnitude and scope could only be realized with the advice and skill of experts in the field of architecture and three-dimensional design. Maya Stendhal Gallery looked internally to its own architect, Scott Weinkle for guidance in formulating the logic, pragmatics, and structural details governing Maciunas’ building system. After scaling the plan, certain numerical patterns appeared, suggesting that Maciunas’ desired the 9 rectangles composing the building to be modular units of the same size. Weinkle’s precise observation allowed all elevations and sections to be developed within a well-defined proportional logic. These conclusions were then imported into a 3-D modeling program with the ability to give the rendered images various lighting and material characteristics. From this, the architectural model and accompanying walk-through digital animation were generated. Measuring 142 x 147 x 40.5 cm. with a base of 162.5 x 167.5 cm., the model is exactly 1:10 the size of the actual house. Materials consist primarily of heavy density fiberboard with styrene, extruded aluminum, acrylic panels, and a wood base.

Maciunas Prefabricated Building System is devised as a methodological plan illustrating his hyper-rational analysis and the extraordinary design acumen for which he has become known. Also referenced as Maciunas’ Plastic Prefab, it was initially published as a 1965 collaborative work by Henry Flynt and Maciunas and in a 1966 issue of the journal Underground. One year prior to this project, in 1964, Maciunas wrote The Grand Frauds of Architecture: Mies van der Rohe, Eero Saarinen, Gordon Bunshaft, Frank Lloyd Wright, a text that critiques the modern masters for not staying true to their own ideals. Offered as a direct response, Maciunas’ scheme reflects his belief in architecture’s capacity to uphold standards of value, economy, and efficiency.

You see, the reason I am so concerned with [functionalism] is that that’s an architect’s training. I mean, that’s the way the architect thinks, he thinks in functionalism otherwise he’s not an architect, he’s a sculptor or a stage designer. George Maciunas, interview with Larry Miller, 1978. Transcript repr. in Jon Hendricks ed., Fluxus etc./Addenda I. The Gilbert and Lila Silverman Collection (New York: Ink &, 1983), 24.

George Maciunas was a Lithuanian born American artist. He studied architecture at Cooper Union School of Art in New York from 1949 to 1952, and the Carnegie Institute of Technology in Pittsburgh from 1952 to 1953 receiving his Bachelors with honors in 1954. After graduation, he came back to New York continuing his graduate studies at the Institute of Fine Arts, New York University, with a concentration on art history of the European & Siberian migrations from 1955 to 1959. He also worked with renowned firms such as Knoll and Skidmore, Owings & Merrill in the 1950s and early 1960s. His experience in the corporate design world led him to redeploy its very systems toward artistic and critical ends, helping to provide him with the impetus behind the Fluxus art collective of the 1960s and 1970s.

Considered a charismatic, highly intelligent individual by all who met him, Maciunas’ had an impressive spectrum of interests that he studied rigorously: art history, music, design, architecture, and the history of ancient cultures, among others. He poured his wealth and knowledge into making numerous charts, systems, and atlases, from which he created his diagrammatic “learning machines.” He became known as the “Chairman” and “Impresario” of Fluxus. Fueled by Maciunas’ innovative views on art and society, Fluxus attracted an international array of artists whose work cut across genres including music, dance, visual art, literature, non-narrative film, architecture, performance, and “events.” His graphic layouts for posters, flyers, newspapers, artists’ name labels, and the presentation of Fluxus works as “anti-commodities” have become celebrated for the landmark design that so distinguished Fluxus production. These works have come to symbolize the utilitarian philosophy that drove Maciunas in life and art, favoring “functionalism” and “concretism” over decorative attributes.

In the mid to late 1960s, Maciunas’ background in architecture guided his utopian vision of establishing the first artists’ living and working cooperatives in New York City, which he dubbed the Fluxhouse Cooperatives. A marker of urban planning and design, this pragmatic program initiated in 1966 renovated abandoned buildings creating the first artists’ lofts in the region below Houston Street in NYC, known then only by the fire department’s designation – “Hell’s Hundred Acres.” The first successful Fluxhouse Cooperative organized by Maciunas was 80 Wooster St. in 1967, which housed his friend and compatriot Jonas Mekas’ Filmmakers’ Cinematheque. His endeavors forever changed the face of New York’s legendary neighborhood, and ultimately earned him the title “Father of SoHo.”

Maya Stendhal Gallery would like to thank architect Scott Weinkle for assembling the architectural presentation, Julia E. Robinson and Christian Xaterc for their contributions to the project carrying out valuable research and scholarship in support of Maciunas’ vision, Brooklyn Model Works for building the architectural model on view, Maurice Arduz for creating the three-dimensional architectural renderings and accompanying walk-through digital animation, Carolina Carrasco and Mari Dumett for their original contributions in research and scholarship on Maciunas Prefabricated Building System, and Ken Friedman, Hollis Melton, and Charles R. Simpson for providing support material in the form of essays and writings. The exhibition George Maciunas Prefabricated Building System was organized and produced by Harry Stendhal, Director of Maya Stendhal Gallery, New York.