Fragment 7: Communism never happened - Vocabulary. The project is an interdisciplinary environment (art, humanities, economic and natural science theories). It is a permanent exhibition of art objects, archives, theoretic texts and spoken forms (both live and archived), which grows with time. It has an ambition to be a subjective museum whole relating to the individual processes of transformation. 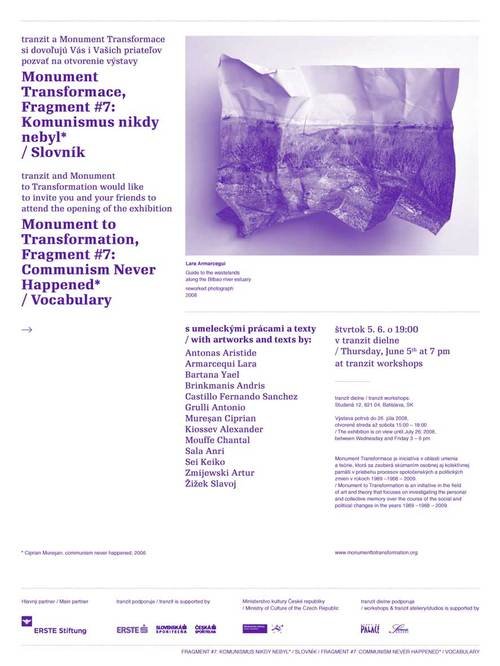 The question we put to ourselves in the autumn of 2006 was a relatively simple one: What has happened in the twenty years since the fall of the Iron Curtain to us, to the artistic imagination, to society? How are we to relate today to the twenty-year period of transformation that we were, and still are, part of?

It is necessary in the first place to stand back somewhat from such a broadly formulated feeling and begin considering how that feeling and the need to grasp the contemporary present may be formulated. The transformation lays out before as a time segment the period 1989-2009, in the past demarcated by the Velvet Revolution and the fall of the Socialist system, which was followed by the building of a new social order. Despite its great complexity, the transformation process has an inner compactness. If we define this period as one of transformation, the option presents itself to follow this transformation in comparison to similar processes in other countries or in scientific or social areas (on various levels), whereby the differences in the quality and quantity of the transformation should not be confused with the fundamental difference in the nature of such a process. This approach enables us to escape the confines of the local context of the Czech Republic and to consider social transformation not only in the obvious space of so-called Eastern Europe, but also, and especially, beyond it. In the first step we expanded our research to countries outside of Eastern Europe that have undergone a similar transformation of the social system, such as Greece, Spain and Portugal, and in the next step we directed our interest towards the countries of Central America and Southeast Asia. An interest in transformation models in various periods liberated us from the trap of the polarised clichés of West-East/East-West. A new map emerged of the transformational perspective. The question yet to come is to what degree such a map may be coherent – whether it can represent countries that differ in the degree of transformation, but not in the nature of the transformation process.

When we speak of transformation, time is much more important than geography or geopolitics. Transformation in the passive sense is conducted within historical time (from-to) and this chronology generates historicity and sequential relationships.

In our model of transformation, we relate traditional historicity to human time and from this relationship we derive the following table, with the aid of which we try to reformulate the concept of past, present and future.

Of greater interest to us are the internal time and internal tempo of the transformations themselves. Focussing on the internal time of transformation processes in various countries leads us to a conviction of the unimportance of a quantification of time that is relative to conditions, which allows us to put the relatively rapid processes that we have witnessed in the last 20 years in our own space into the context of certain specific processes of long-term transformation, for example in Sweden or in Great Britain. These processes differ in relative length, but not in their nature.

Monument to Transformation is a project that receives long-term support from ERSTE Foundation.