Second contemporary art biennial. The key idea behind this event is the complementarity of the works presented by the two organisers, Ger van Elk for the Musee Malraux, and David Perreau for the monumental works around the city. They come from different cultures and generations and follow different artists but accept their differences in a spirit of friendly rivalry. Art works that Perreau describes as "stealthy" melt into the urban landscape, the first Partouche award for experimental short films, and a symposium to address the issue of current and future funding of the arts in France. 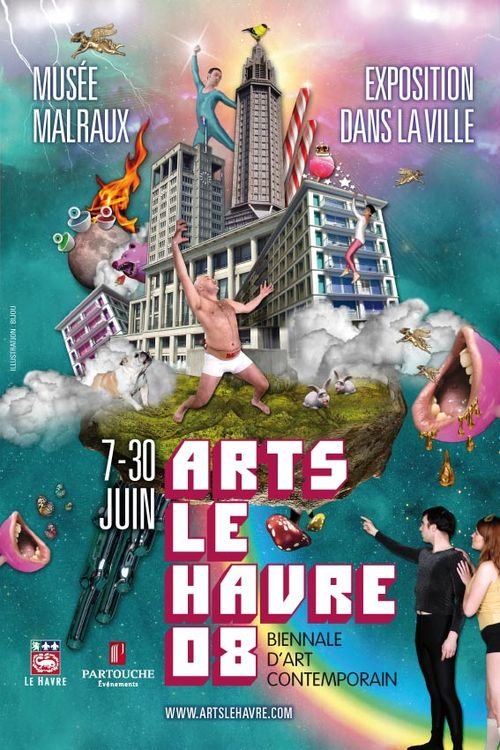 The key idea behind this event is the complementarity of the works presented by the two organisers, Ger van Elk for the Musée Malraux, and David Perreau for the monumental works around the city. They come from different cultures and generations and follow different artists but accept their differences in a spirit of friendly rivalry – this is what will spark the 2008 event.

AT THE MUSÉE MALRAUX
Ger van Elk, a Dutch artist whose work will be presented at the New York MoMA in 2009, wanted to address the issue of how contemporary art is represented at biennials, so here in Le Havre he has vetoed excessive show, size and noise in order to create a more intimate relationship between the work and the public, offering a relevant generational view of an artist and a man of conviction who finds that contemporary art has a tendency to become somewhat turgid when put on display for the general public.

IN THE CITY
David Perreau, Director of Le Spot in Le Havre and a lecturer in history of art at Rennes University, is presenting the monumental art, asserting it and, at the same time, offering works that he describes as “stealthy”, which melt into the urban landscape. Does the concrete duct created by the artist Olivier Mosset [1] and presented in the square in front of the Musée Malraux belong to the biennial or is it actually just part of the scenery like a safety barrier or a pedestrian crossing? Do Anita Molinero’s phone boxes really work or is there a surprise in store for their potential users? Didier Marcel’s [2] tree, planted very recently in the micro-garden on the Esplanade du Volcan, is already seven metres tall… All the works on show in the streets are original or have been redesigned for the city of Le Havre.

Right from the start in 2006, the biennial strove to find an identity, its raison d’être. The same approach has been applied for 2008, with two innovations, two new events:
PARTOUCHE AWARD
FOR EXPERIMENTAL SHORT FILMS
The other innovation for 2008 will be the creation on 21st June of the first Partouche award for experimental short films, experimental in the sense that many deserving works are released on a very small scale without any professional promotion. For twenty years the short film was an obsolete “object” that could not find its own pace. Another generational change is that young people now appreciate these short, fast formats, which are often provocative. Today the video medium is part of the contemporary art scene. Now we just have to be patient until 7th June 2008…

FUNDING THE ARTS IN FRANCE:
A SYMPOSIUM
A symposium on Saturday 14th June will address the issue of current and future funding of the arts in France, a legitimate question for the biennial to ask because apart from its partnership with the city of Le Havre it is fully financed by a private partner, the Partouche group. Contemporary art collectors and enthusiasts, private patrons and hopefully representatives of institutions and official bodies will debate this issue, which extends beyond the strict confines of the arts and reaches into society in general. How many cities like Bilbao [3] and Liverpool [4] are now challenging to become the “European capital of culture” and have become the focus of attention via their strong campaigns?

1. Olivier Mosset is exhibiting at the 2008 biennial of the Whitney Museum of American Art in New York.
2. Didier Marcel: The international jury of the Prince Pierre de Monaco foundation awarded its 2008 prize to Didier Marcel’s work Sans- Titre (Labours) (2006). This prize is awarded to a contemporary art work created in the previous two years by an emerging artist on the international scene.
3. “Bilbao has rediscovered its dignity and it’s all down to the Guggenheim museum, which has created 4,500 jobs, directly and indirectly. Unemployment in the region fell from 20% in 1990 to 4.1% at the end of 2006.” Source: Le Monde, 18th October 2007.
4. European capital of culture 2008. “Liverpool is prepared to welcome 1.7 million visitors and is banking on revenues of €150 million (…) the number of employees should rise from 20,000 to 30,000 by 2015.”
Source: Journal des Arts, issue dated 14th February 2008.