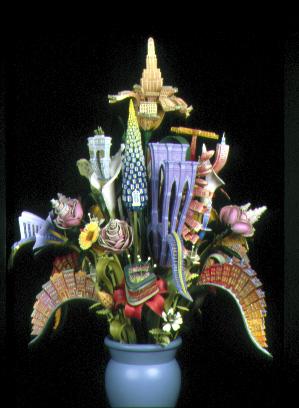 It seems we have a natural fascination with things lilliputian. Many of us can remember being transfixed by model train sets, doll houses, or Gulliver's Travels. While we may readily associate small-scale environments with childhood, scale models allow people of any age to imagine a world different from their own. The Aldrich Museum of Contemporary Art is pleased to present Model World, opening January 20 through May 1, 2002. The artists in Model World painstakingly recreate miniature landscapes, cityscapes, and interiors to a variety of different ends.

Charles Simonds creates detailed landscapes of what appear to be primitive man-made domiciles in arid terrain. His sculptures have an ancient and mysterious quality-familiar but wholly a result of the artist's vision of a future time. Rob de Mar's candelabra-like sculptures are composed of linked, floating bodies of land. His sculptural forms mimic networks of tree roots, waterways, or veins-referencing the artist's interest in systems of nature. Kazumi Tanaka has built a fragile village inside an antique piano. Her miniature environments are psychological spaces, capturing both her memories of childhood, and her search for security and comfort in a changing world. Viewed through an aperture, Michael McMillen's detailed interiors subvert the viewer's sense of scale, time, and space. By controlling perspective, lighting, and adding elements of sound and smell, McMillen's work stimulates the viewer much the way film or theater does.

The Aldrich Museum of Contemporary Art is pleased to announce Floor to Ceiling, an exhibition of site-specific installations, January 20 Â­ May 1, 2002. Jean Blackburn, Francis Cape and Markus Linnenbrink have been invited by the Museum to treat a single plane in one gallery on the Museum's third floor, addressing their individual artistic concerns while conflating the function of architecture in the Museum's oldest galleries.

Jean Blackburn will literally tear up the existing gallery floor to expose and reconstruct the wood floorboards into her own site-specific sculpture. By reconfiguring the floor with found material, she is creating a dialogue of the architectural process through destruction and rebuilding. Using this approach, Blackburn underscores the mutability of form in not only architecture, but in the Museum's role as a historical institution.

Apprenticed as a woodcarver and working exclusively as a carpenter during his career, the English artist Francis Cape will approach the Museum walls as he toys with the idea of form versus function. Cape is meticulous in his own hand-made minimalist sculpture that resembles furniture yet shuns function. Cape's mysterious work evades classification by blurring the lines between furniture and architecture, and painting and sculpture.

Precision and logic overrides much of Markus Linnenbrink's work. His paintings of colorful stripes will cover the gallery ceiling as a testament to the artist's approach to painting as a stage for color. Without a canvas, the artist uses paint to delineate architecture. There is no specific scale or formula that control the artist's stripes and color, but rather an overriding sense of nature and an organic sense of color.

Natacha Lesueur's photographs are marked by a struggle between desire and repulsion. Her photographs of bodies decorated with food evoke a mixture of fascination and disgust by juxtaposing the beauty of the female body with the basic human desire for food. Her current work elicits a similar struggle of perspective. By "painting" optical exam charts onto female models, Lesueur forces the viewer to use the body as a test of vision.

The Aldrich Museum of Contemporary Art is pleased to present OPTICALIFRAGILISTIC: New Photographs and Arrangement Culinaire, running January 20 through March 17, 2002 and curated by Richard Klein, assistant director at The Aldrich Museum, and Thierry Davila, curator of contemporary art at Capc MusÃ©e d'art Contemporain in Bordeaux, France. Fusing the ideas of consumption and desire, Lesueur will present color photographs in conjunction with an installation culinaire, an edible installation that will serve as a buffet at the exhibition's opening reception.

Lesueur's color photographs portray partially clothed women with optical exams stenciled to their skin, usually slumped over, their bodies appearing weightless. These cryptic positions and tests force a distance between the viewer and her work as if we, the viewers, are taking an eye exam. Using the exams as a visual barrier, the female models are left de-eroticized, shifting the focus from the body to the act of seeing. The result is a photograph that is part crime scene examination, and part high fashion photo shoot. She is using her subject's to challenge our perspective, forcing the viewer to determine what we truly see when we gaze upon a female body.

Natacha Lesueur lives and works in Nice, France. The Aldrich Museum will be the first venue in the United States to host a solo exhibition of her work which is funded in part by the Association FranÃ§aise d'Action Artistique, a program of the French Foreign Ministry. Lesueur has had several one-person and group exhibitions in Germany, France, and Switzerland. Her work is currently being shown at Le Centre RÃ©gional d'Art Contemporain and Gallerie Soardi in Nice, France.

Artists and their friends from around the world have submitted snapshots to The Aldrich Museum of Contemporary Art for a wall to wall, unedited, explosion of photographs that range from the inane to the inspiring.

The Aldrich is pleased to present Snapshot, an exhibition featuring photographs by more than 1,300 artists and laymen from twenty-four countries, opening January 20 through May 1, 2002. To complete the project, this past fall The Aldrich invited the general public to participate with their own snapshots that will also be on view during the exhibition.

Originated by the Contemporary Museum in Baltimore, a mix of artists, art professionals, students, critics, and collectors were invited to submit their own personal snapshots for the exhibition. Well-known artists participating include John Baldessari, Isaac Julien, William Kentridge, Kiki Smith, Andres Serrano, and John Waters. This incredible volume of photographs will be arranged in a grid format in alphabetical order in order to avoid curatorial prejudice. Each entry has been accepted with the only limitations being the deadline and the size of the submissions.

This collection of snapshots brings into question the boundaries we draw between a photograph shown as a work of art and the random snapshots we may all have stored away in photo albums. Rather than attempting to answer sweeping questions, as exhibitions often do, Snapshot aims to raise questions concerning the Museum's curatorial process and aesthetic aims. Snapshot challenges traditional categories of art and in some ways becomes an experiment in democracy.

The Aldrich Museum of Contemporary Art is located in Ridgefield on Route 35. Regular Museum hours are Tuesday through Sunday, 12 noon to 5 pm.