An exhibition about sexual desire, gender and identity construction in the visual arts at the turn of the 21st century. Disregarding for the moment the heterosexual dominance of much of our daily life, it reveals instead alternative lifestyles such as homosexuality and transsexuality. In over 100 artworks by some 35 national and international artists the display gives an impression of the sheer wealth of images that the exploration of sexual identity has yielded. 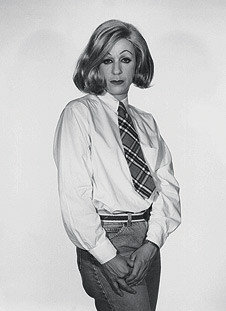 Just Different! is the challenging title of an art exhibition about sexual desire, gender and identity construction in the visual arts at the turn of the 21st century. Disregarding for the moment the heterosexual dominance of much of our daily life, it reveals instead alternative lifestyles such as homosexuality and transsexuality. In over 100 artworks by some 35 national and international artists, the exhibition gives an impression of the sheer wealth of images yielded by the exploration of sexual identity. Epitomising the exhibition will be the nine-metre high monumental statue of David, in bright pink and canary yellow, by Hans-Peter Feldmann, which will be installed in the square outside the Cobra Museum of Modern Art. It is an iconic piece that symbolizes sexual diversity and freedom, but above all pleasure. It is just different.

The search for sexual identity and the wish to put this into some form or other is inherent to our humanity. It affects us all at various stages in our lives. Artists are no exception. At times their work takes the form of explicitly erotic images, presented with great panache, but equally it can be just an intimate glimpse into the artist's life: fragile and personal. No matter how important these feelings are, sexual identity has so far rarely been considered as a subject for a museum exhibition - let alone the emancipation of sexual identities that deviate from the 'normal'. The last time was ten years ago, when the Stedelijk Museum Amsterdam put on a show called From the corner of the eye, which coincided with the Gay Games.

The reasons for organising the exhibition Just Different! are twofold. Firstly, for some time the museum has been wanting to look at sexual desire, gender and identity construction as important themes in art during the late 20th and early 21st centuries. In recent decades, visual art has more than once focused on these themes and on developments taking place. Often it was the artists - men and women alike - who were at the forefront of the liberation campaign.

A second reason for programming this exhibition is that it fits in with a debate on sexuality and sexual nature that is currently taking place in the Netherlands. As before, with exhibitions such as Brave New World and China Now in 2007, and the solo shows of Rachid Ben Ali and Dolores Zorreguita in 2005, the museum is keen to present itself as a beacon of freedom and tolerance.

To organise the exhibition we have called upon the knowledge and experience of the German curator Frank Wagner. Wagner is an expert on the subject of sexuality and diversity in modern and contemporary art. In the past, he was invited by Kasper König of the Ludwig Museum in Cologne to organise an exhibition on the same theme: Das achte Feld - Geschlechter, Leben und Begehren in der Kunst seit 1960.

The exhibition will be accompanied by a host of extra events, including performances, video shows and talks.

The Cobra Museum of Modern Art is committed to keeping alive the memory of CoBrA by continually bringing its cultural and art-historical importance to the attention of the public. In addition to showing the work of CoBrA artists, the museum seeks - through a programme of exhibitions focusing on contemporary visual art - to showcase prominent artists whose work reflects social commitment.