Continuing to investigate the realms of subliminal experience, the two artists presents their sound installation "The Silence is Twice as Fast Backwards". On display also new photographic works created at Maggs Antiquarian Bookshop in London and at Sudeley Castle. The images at first glance look like pastoral landscapes but on closer inspection they reveal an unsettling artifice, the cultivated topiary suggesting a series of doorways. 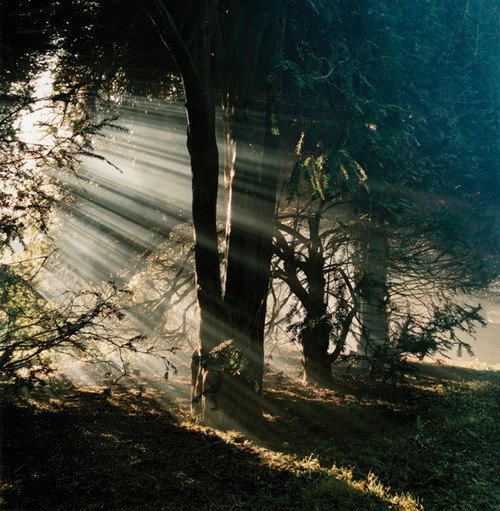 303 Gallery is pleased to present our fourth exhibition of work by Jane and Louise Wilson.

Continuing to investigate the realms of subliminal experience, Jane and Louise Wilson will present their sound installation "The Silence is Twice as Fast Backwards." The title is a quote from Jean Cocteau’s film “Orphée”, it refers to the moment in the film when Orphée receives his first coded message from the underworld. In the film a bell rings signaling Orphée’s descent, whereupon the action is reversed. Using the film soundtrack as a starting point, the Wilson’s recorded both a full eight bell peal and each bell sound individually, at St. Peter's church in Winchcombe, Gloucestershire, England. The sound is edited randomly and in parts reversed. Within the eight-channel installation there is a trigger point that cuts from a discordant bell, into a full bell peal.

In addition to the sound installation, the Wilsons will exhibit new photographic works created at Maggs Antiquarian Bookshop in London and at Sudeley Castle, where "The Silence is Twice as Fast Backwards" was originally commissioned. The images from Sudeley at first glance look like pastoral landscapes but on closer inspection they reveal an unsettling artifice, the cultivated topiary suggesting a series of doorways. The photographs taken at Maggs Bros Ltd. are in an area known as the “Oddments Room” so called because it contains, “incomplete and odd volumes, noble fragments and defective books,” dating from the 15th century. The images show through a maze of shelves the exhaustive mental and physical process of cataloging an archive. The images also refer to another archive, the Stanley Kubrick Archive in London, where the artists are working on a new commission for Animate in 2008. The lone female figure in the new photographic works was inspired by a series of pre-production stills taken by Kubrick of a wardrobe model, for a film that was never made.

In the past year, Jane and Louise Wilson had a two-person exhibition showing the multi screen video and photographic installation "Sealander" inspired by the decaying World War II bunkers along the Atlantic Wall, at the New Art Gallery in Walsall, England and have participated in the Glasgow Film Festival and "Stardust or the Last Frontier" at The Museum of Contemporary Art in Val-de-Marne, France. They will be the inaugural exhibition showing a new multi-screen video installation for the opening of a new contemporary art center, The Quad Gallery in Derby, England in 2008, and have been awarded a Film4Cinema Extreme commission for the development of a new work in Spring of 2009. A two-person exhibition will open at the Talbot Rice Gallery in Edinburgh in 2009. Past exhibitions have included "Out of Time" at the Museum of Modern Art, New York; "Charged Space" at SF MoMA, San Francisco; "Moving Pictures" at the Guggenheim Bilbao; and “A Free and Anonymous Monument” at the Baltic Center of Contemporary Art.