On show three short videos and the presentation of All Together Now. This new body of work, which unites the spontaneous with the tightly scored, continues to develop a performative strategy that combines forethought, action, and acute attention to the present moment. 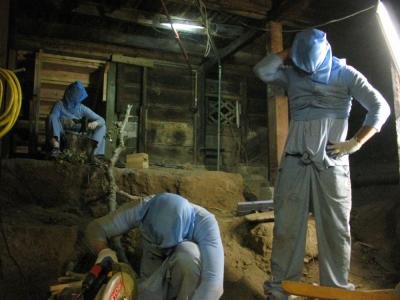 Elizabeth Dee Gallery is pleased to present an exhibition of new work by Harry Dodge and Stanya Kahn, featuring three short videos and the presentation in the main gallery of All Together Now. This new body of work, which unites the spontaneous with the tightly scored, continues to develop a performative strategy that combines forethought, action, and acute attention to the present moment. Here, the risk-taking, vulnerability, and fearlessness, which have customarily played a central role in Dodge and Kahn's practice, constitute an urgent appeal to reinvigorate our sense of agency as citizens.

I Vote for You, Man takes place on a cold and foggy beach in California and features the character Lois (Let the Good Times Roll) as she scouts a beach location with Peter the cameraman, ruminating on the physical and psychological detritus they discover along the way. A one-take revelation in improvisation, the video skirts a line between found footage documentary and an exposé on process, revealing the complexities, triumphs and fractures of communication.

Masters of None and the epic All Together Now mark Dodge and Kahn's departure from the dialogue driven, narrative nature of their earlier work.

Ambient and textured, Masters of None captures the domestic life of a hooded tribe whose mundane activities coexist with the surreal. All Together Now presents a more complex universe set in a post-apocalyptic moment hauntingly close to the present. The twenty-six minute video, with a richly layered soundtrack, follows various "clans" as they forage for resources, develop interdependent relationships, and negotiate what's left of civilization. The threat of extinction looms alongside a sense of liberation from consumer trappings and corporate ownership, while an unanswerable question persists: how will we survive? In both pieces, facelessness and the absence of language push the artists' ongoing interrogation of communication, meaning and the possibly inextricable relationship between words, thoughts and forms.

A deepening of their meditation on the collaborative process, Nature Demo is a partly choreographed, partly improvised piece in which the pair appears as an amateur film team attempting to make a "How-To" video about post-civilized life, but without any of the real skills needed for the task. Their methodical journey hovers between document and orchestrated farce as it poses questions about the average citizen's claim to competency in an unregulated landscape.

This is Dodge and Kahn's second solo show with Elizabeth Dee. Their work has been featured in the 2008 Whitney Biennial, The Whitney Museum of American Art, New York; California Video, The Getty Center, Los Angeles; Laughing in a Foreign Language, The Hayward, London; Eden's Edge, Hammer Museum, Los Angeles; Between Two Deaths, ZKM Karlsruhe; and Defamation of Character, PS1 Contemporary Art Center, Queens. Profiles of their collaboration and process of making All Together Now have been published in The New York Times and Artforum.