Zidane: A 21st Century Portrait. With seventeen cameras the artists captured every step of the great French football player during the game Villareal vs. Real Madrid, from the kick-off to the final whistle. From the edge of the pitch, the lenses shadowed every move of the player, instead of the movements of the ball. 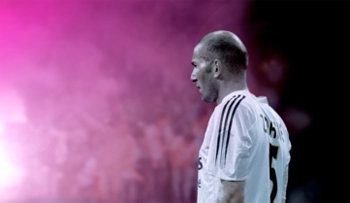 On the occasion of the European Football Championship, taking place in Switzerland and Austria, the daadgalerie will show an unusual piece of filmic art. On April 23 2005, Douglas Gordon, who was a guest in the artists-in-Berlin program in 1998, and Philippe Parreno recorded the football game Villareal vs. Real Madrid. With seventeen cameras they captured every step of the great French football player Zinedine Zidane, from the kick-off to the final whistle. From the edge of the pitch, the lenses shadowed every move of the player, instead of the movements of the ball. This resulted in a portrait, which both directors Gordon and Parreno subtitled: A 21st Century Portrait.

It is a well-documented fact that Zidane retired from his professional football career two years ago, after the World Cup football final in Berlin’s Olympic stadium. This final became infamous for the clout he administered a member of the opposing Italian side. Douglas Gordon was present in the stadium and an eyewitness of the game. Zidane: A 21st Century Portrait has never been shown in Germany and will, on this occasion be shown until 9 August in the daadgalerie. This presentation also marks the welcome return of Douglas Gordon to Berlin, who ten years after his DAAD-residency returns to live here to produce new films.

Douglas Gordon was the recipient of the 1996 Turner Prize, the 1997 Venice Biennial's Premio 2000 award, and the 1998 Hugo Boss Prize awarded by the Solomon R. Guggenheim Museum. His work has been the subject of numerous museum exhibitions, including those organized by the Museum of Contemporary Art, Los Angeles (2001); the Fundació Joan Miró, Barcelona (2006); The Museum of Modern Art, New York (2006); the Museo d'Arte Moderna e Contemporanea, Trento, Italy (2006); and the National Galleries of Scotland, Edinburgh (2006). The artist lives and works in Glasgow and Berlin.

On June 12, Douglas Gordon will appear as a special guest on the EURO2008 public viewing podium of the 11Freunde.