Monday to Saturday from 2-6 pm

Rita McBride - Koenraad Dedobbeleer. For this show, the 2 artists are producing specific works, shifting architectural structures in the exhibition space. They have never worked together before, but they have a shared interest in forms issuing from reality. Both of them proceed with an analysis of architectural factors and urban fixtures, all so many structures which organize the space. By their shift and hijacking, they illustrate just as much a perceptible approach to forms as a line of thinking about their history, their production conditions, economic and industrial alike, and their reception. 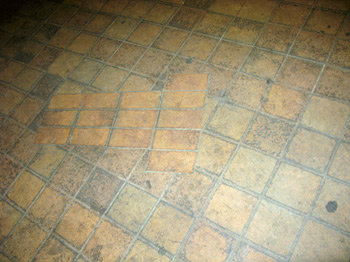 The FRAC Bourgogne, Regional Contemporary Art Collection, has invited Rita McBride (born in Des Moines, Iowa (USA) in 1959) and Koenraad Dedobbeleer (born in Halle, Belgium, in 1975) to come up with a very first exhibition together. These two artists feature in the FRAC Bourgogne collection, Rita McBride with Stairs, Gentle (1999) and Koenraad Dedobbeleer with Erewhon (2000). For this show, the two artists are producing specific works, shifting architectural structures in the exhibition space. By initiating this collaboration between Rita McBride and Koenraad Dedobbeler, Eva Gonzalez-Sancho—director of the FRAC Bourgogne and curator of this exhibition—has been keen to create the conditions of an artistic experiment. The artists have never worked together before, but they have a shared interest in forms issuing from reality. Both of them proceed with an analysis of architectural factors and urban fixtures, all so many structures which organize the space. By their shift and hijacking, they illustrate just as much a perceptible approach to forms as a line of thinking about their history, their production conditions, economic and industrial alike, and their reception. By inviting them to use the exhibition room at the FRAC Bourgogne, what was involved above all was enabling them to respond to this setting, both jointly and severally.

Rita McBride has shown an interest in a form of service station whose gradual replacement she has observed in the United States, and more precisely in Los Angeles. We can all remember that work produced by Ed Ruscha in 1967, Twentysix Gasoline Stations, where, using photography, he listed the gas stations situated along Route 66 between Oklahoma and Los Angeles. Without any concern for aesthetics, he recorded “the strange link between people and their rural surroundings, without underpinning or dramatizing this strangeness” (Ed Ruscha).Like Ed Ruscha and his use of photography, Rita McBride describes “the modern man” by choosing stereotypes out of context, ordinary forms. From the late 1980s onward, she has been undertaking a critical reading of art history combined with an analysis of the material and political components of the present-day world. Just one major solo show in France to date has enabled people to discover her work (at the Institute of Contemporary Art in Villeurbanne, in 2002). The service station is the standard building, that has become the cultural symbol of the age of the automobile. Its architecture has been ceaselessly evolving in time with functional requirements, but also with the development of the petrol market. The model that Rita McBride has chosen, and which is tending to be replaced today, is a model called a “shelter-roof”, where the only function highlighted is the distribution of petrol. The choice of this type of building obviously takes on a specific meaning today, when the end of this resource is on the books.

Koenraad Dodobbeleer, for his part, has chosen to move the wooden framework of a lower roof in a residential building. Inferior purloin, joists, tie-beams are all made identically and assembled in the FRAC Bourgogne space. The wooden framework is incorporated under the place’s metal frame. This displacement is not patrimonial, as may be the case with museums of rural dwellings, for example. So there is no conservation measure involved here, but rather a confrontation which creates a shift in more ways than one. A strange time scale between two almost contemporary framework principles in their execution. There is a confusion of tempos between the the wooden frame referring to old models and the metal one appropriating new methods. The wooden frame is displayed and experimented with for its own sake, a spider-like structure in which the onlooker evolves. Koenraad Dedobbeleer bases his work, ever since his first shows in the late 1990s, on the presentation of objects and spaces which accommodate very tenuous transformations. For him, presentation is the fact “of offering or proposing something that is deliberately open and available”. For him it is a non-scientific study of possibilities. He has been present on the French scene in one or two rare group shows, but he often works in a collaborative way, as here, with his first real appearance in France.

The confrontation of these two works in the FRAC Bourgogne venue reveals the many different ways in which these two artists question the real in the art space. Both broach space through what structures it, the architecture and what stems therefrom. As an object that is every bit as formal as it is cultural, it is also for Rita McBride the praxis of sculpture as much as an approach to and construction of the landscape. For Koenraad Dedobbeleer it is a many-facetted and open experiment. This joint venture lets us experience the intrinsic bond with reality, that infinite vanishing line, which artists so indefatigably pursue.
Claire Legrand
manager of the visitors'department
Translated by Simon Pleasance

The exhibition Tight, Repeating Boredom (curator: Eva González- Sancho) by Rita McBride and Koenraad Dedobbeleer is being organized by the Frac Bourgogne, Dijon, in association with the Kunsthalle de Bern (CH) and the PMMK - Musée d'Art Moderne, Ostende (BE).

This exhibition was produced with the support of the Ministry of Culture and Communication (DRAC: Regional Direction of Cultural Affairs of Burgundy), the Burgundy Regional Council, the General Council of the Cote-d'Or and with the backing of the Flemish Government.

The Frac Burgundy is member of PLATFORM.

A catalogue of the exhibition Tight, Repeating Bordeom, which will be held at the FRAC Bourgogne (Dijon)then at the Berne Kunsthalle (Berne, Switzerland) and at the PMMK - the Museum of Modern Art in Ostend, will be published in late 2009.