Knowledge is Sweeter than Honey: inaugural exhibition. A show of recent works by Egyptian-German artist that presents a selection of her mashrabiya screens, drawings, photographs and installation works. For Hefuna, every work's meaning is fluid, changing to accommodate the vantage point of each new viewer. 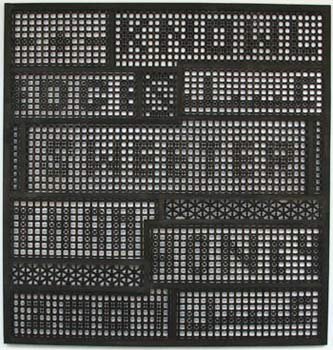 Albion New York is pleased to announce its inaugural exhibition, Knowledge is Sweeter than Honey, a show of recent works by Egyptian-German artist Susan Hefuna. The exhibition marks Hefuna's first solo show in the United States and will present a selection of her mashrabiya screens, drawings, photographs and installation works.

For Hefuna, every work's meaning is fluid, changing to accommodate the vantage point of each new viewer. By studying how audiences in Egypt and Germany responded to her early works, she learned "that there is not one truth, but layers of interpretations or perceptions.” Since then, Hefuna has continued to make viewers aware of the cultural codes that govern their interpretive processes, and encouraged them to look beneath the surfaces of their preconceptions.

In her photographic work, Hefuna creates images that probe the audiences' assumptions about time and place. Made with a pinhole camera, these dusty, soft- focused and somewhat skewed cityscapes seem impenetrably foreign and vaguely exotic to most Western eyes. Audiences in Cairo, however, can instantly dismiss the distortions caused by the camera's antiquated technology and recognize their own unmistakably modern city.

Hefuna's drawings are hand-rendered on several sheets of tracing paper, which opens up the multi-layered works to many different interpretations-- from Modernist grids to latticed windows to sleek skyscrapers.

Her three-dimensional mashrabiya screens and vitrine installations play on the notion of what is hidden and what is seen. Mashrabiyas have long been used in Arabic architecture to allow a building's inhabitants to look out without being seen, to simultaneously reveal and conceal. As Hans Ulrich Obrist stated, Hefuna adds a dual meaning to her mashrabiyas by presenting them as both "autonomous sculptures" and
"architectural ornaments.”

In Vitrines of Afaf, Hefuna presents objects imbued with rich but untold back-stories. Chosen for their personal significance, the objects represent the secret desires, hopes and dreams of the "Afaf" or "unnamed" women Hefuna met while working in Cairo. Displayed in the kind of glass vitrines commonly used by street vendors, these otherwise banal objects are set aglow by their implied but ever-elusive meanings.