No Images of Man

The exhibition is reprise, reconsideration and sequel of a show held in 1959 the Museum of Modern Art. The figurative expressionism, which characterized this display, is indeed a persistent leitmotif, not only in the art being made after World War II but also recurring since with regularity - and varying degrees of empathy and enmity - despite wanton shifts in focus and rationale. 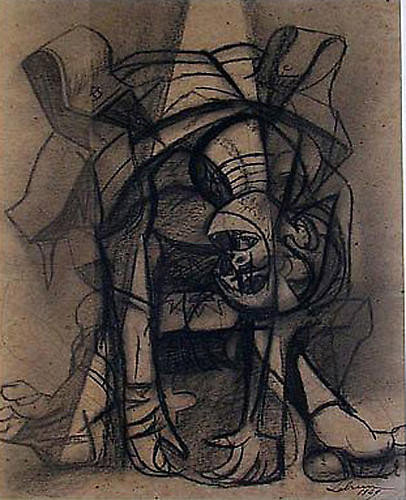 Gering & López Gallery is pleased to present No Images of Man curated by Mitchell Algus. The exhibition will feature work by twenty internationally renowned artists:

"First there was the Museum of Modern Art's 'New Images of Man' exhibition. I had rather hoped we would be spared another such foray into the banalities of crackpot existentialism… but no such luck."
-Hilton Kramer, The New York Times, October 28, 1973

In 1959 the Museum of Modern Art presented New Images of Man, an exhibition of recent imagist art from Europe and the United States assembled by the expatriate German art historian Peter Selz. Coming at a time when Abstract Expressionism was ascendant and figurative work widely viewed as retrograde, the show seemed a twisted paragon of high-minded humanism for a traumatized cold war world. Reviews were almost uniformly negative.1 Writing in The New Yorker Robert Coates found the show "so capricious and so far from representing any broad, true impression of the atmosphere of today that it is hardly worthwhile going into any critical appraisal of it." Manny Farber said in Art News that "[r]ather than being the 'long awaited' answer to Abstract-Expressionism, the Museum's monster show is confusion with wishful thinking buried under its sentimental hide." Notable in his lonely praise was The New York Times' John Canaday who stated earnestly and outright: "this is an important exhibition…it demonstrates that the cultivation of expressive imagery by artists who have seemed isolated from one another has been a pervasive constant in contemporary painting and sculpture."

The figurative expressionism, which characterized New Images of Man, is indeed a persistent leitmotif, not only in the art being made after World War II but also recurring since with regularity – and varying degrees of empathy and enmity – despite wanton shifts in focus and rationale. The current exhibition is reprise, reconsideration and sequel. Giacometti, Butler, Appel, Lebrun and Roszak were in the original 1959 MoMA show. Saura, whose anguished paintings made in Franco's post-war Spain echoed similar concerns, was central to Frank O'Hara's follow-up MoMA exhibition of 1960, New Spanish Painting and Sculpture. Through the 1960s artists like Mallary, Maryan, Marsicano and Beerman manifested deep, oblique, and déclassé existential concerns, often tinged with an absurdism made overt in the work of Beery and Kudo. Today, McCarthy, Meese, Prince, Pensato, Tyson and Burkhart demonstrate that ecstatic transgression and deliriously misanthropic humanism continue to be odd and interesting bedfellows.

-Mitchell Algus
Mitchell Algus, a long-time presence in the New York art world, currently has a gallery on West 25th Street in Manhattan. He opened his first gallery in Williamsburg, Brooklyn in 1989 with Licha Jimenez. In 1992, he moved the gallery to Thompson Street in Soho where it remained until 2001, when he relocated to the current space in Chelsea. The gallery has exhibited work by Harold Stevenson, Lee Lozano, Betty Tompkins, Peter Young, Bill Bollinger, Jack Smith, Martha Wilson, Judith Bernstein, Agustin Fermandez, Joan Semmel, Wojciech Fangor, Boyd Rice, among many others. Since getting a doctoral degree in physical geography from McGill University in 1986, Algus has not only pursued his interests in art but has also maintained a career as a teacher of science in New York City.

Gering and Lopez Gallery
730 Fifth Avenue 646 - New York
Summer gallery hours are Tuesday through Friday, 10am to 6pm and Monday by appointment.