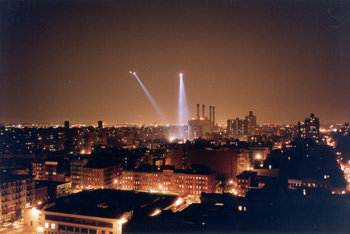 A choice from the collection by Wolfgang Tillmans

The Stedelijk Museum regularly invites artists to present a choice of works from the collection, coloured by their own artistic vision. The presentation is invariably linked to a new acquisition. In this exhibition, German artist Wolfgang Tillmans (b. 1968) expresses his personal view of the collection and simultaneously provides a new and surprising context in which to see his work.

Wolfgang Tillmans’ distinctive style of image-making encompasses a broad range of subjects and shifts between his immediate surroundings, nature, politics, religion, global issues like the AIDS crisis and even the purely abstract qualities of the image. In his installations he employs a free mix of images from widely divergent visual categories. Tillmans’ aim is, as it were, to construct a visual catalogue in which every image can stand alone but also be part of a continuous whole. Each of his exhibitions uses new combinations of these images.

Photography and installation go hand in hand in Tillmans’ work. For him, they are inseparable means of expression. Especially over the last few years, the relationship between his work and a specific spatial situation has become a key preoccupation. The abstract qualities of his work have also become ever more prominent. Tillmans has started producing entirely abstract and often largely accidental compositions, created in the darkroom through the direct manipulation of light on paper.

In the forthcoming exhibition at the Stedelijk, Tillmans reveals the connections between his own work and that of a number of kindred spirits in the art world. Some, like German artist Isa Genzken, with whom Tillmans has exhibited on a number of occasions, share his free and easy approach to images and materials. Others, like René Daniëls and Daan van Golden, are artists who constantly redeploy their own stock of images in new ways. Tillmans also creates a dialogue between his own experiments with the abstract qualities of the photographic image and the work of Ellsworth Kelly, Morris Louis, Robert Mangold and Niele Toroni. The socially committed, political aspect of his oeuvre is reflected in his selection of Roberto Matta, Peter Hujar and Timur Novikov.

A particularly interesting element in the exhibition is an installation created by Tillmans especially for the Stedelijk, which will be acquired by the museum for its collection. Called Stedelijk Room, it combines abstract images with portraits, landscapes, still lifes and townscapes. Tillmans even includes odd references to Amsterdam/The Netherlands, such as his self-portrait Mosshat (1988), made during a period in Amsterdam in his twenties, and a photograph of a painting of William of Orange. Iconic works from Tillmans’ oeuvre included in Stedelijk Room are Lutz & Alex climbing tree (1992), police helicopter (1995), man pissing on chair (1997) and the black-and-white image of an intertwined group of friends Arkadia I (1996). In contrast to these earlier photographs, there are also recent, large-scale abstracts like Freischwimmer 118 (2005) and Silver 50 (2006). Finally, Stedelijk Room includes three tables covered with montages of photographs and cuttings from newspapers and magazines which are in permanent dialogue with the images displayed on the walls.

The exhibition has been devised by Wolfgang Tillmans in close collaboration with Martijn van Nieuwenhuyzen, curator at the Stedelijk Museum.