On mobility and exchange 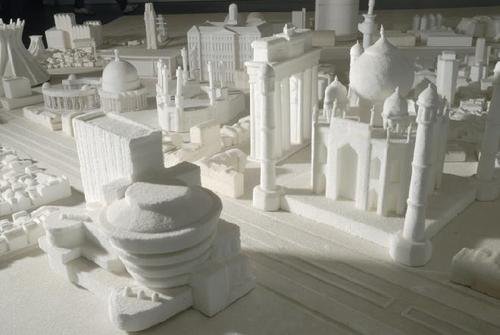 Traditionally ports have been seen as gateways to a wider world, representing a point of contact and exchange with different countries and cultures, facilitating the movement of people as well as goods and ideas. However in an era of globalisation, port cities have ceased to have such territorial allegiances, becoming simply trading points on a worldwide network. The works by the artists in this exhibition explore the idea idea of a port city as a symbolic site of cultural exchange.

Several works in the exhibition and screening programme draw attention to the experience of migration, in particular between North Africa and the Mediterranean. Ursula Biemann presents Sahara Chronicle a video installation focusing on migration routes and also curates a screening programme of artists’ moving image works and documentary films that will be shown throughout the exhibition.

The exhibition also includes a video presented in a giant pillbox by Erik van Lieshout, an installation made in response to the media and looting frenzy that resulted from the wreck of the MSC Napoli by Melanie Jackson, and a vast model of a global cityscape made from sugar by Meschac Gaba, to which an iconic Liverpool building will be added during the course of the exhibition.

Voting closes on 24 July.
The building will be unveiled by the artist at a special event at Greenland Street from 2-4pm on Saturday 2 August.

A Foundation
67 Greenland Street Liverpool L1 OBY
Opening Times
Greenland Street will be open from Wednesday to Sunday 12-6pm and until 8pm on Thursday
Our cafe and bookshop will also be open.
Admission is free